A new method to overcome infertility in mothers uses the same technique which was used to clone Dolly, the sheep 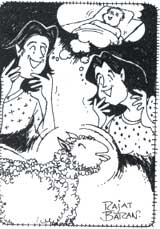 SCIENTISTS at the New York University have come up with another possible way of helping women overcome infertility: they took the genes of an infertile woman and injected them into a donor egg from a fertile woman.

The technique, which is similar to the one which was used to clone Dolly, the first multi-cellular clone, would produce a baby with two genetic mothers. A baby that might result from such a high-tech union would raise questions of which woman is the mother, or both. Some medical ethicists described the research as "profoundly disturbing", but typical of the fast-paced and loosely- regulated field of reproductive medicine. It is not human cloning, some scientists say, although it borrows cloning technology to produce the embryo.

The method empties the gene-packed nucleus from an egg donated by a fertile woman. Scientists then transfer the genes from the egg of an infertile woman into the hollowed egg to make a single recombinant egg. It is fertilised with the sperm provided by a father and the resulting embryo is transplanted into the infertile woman's womb. The method used by Jamie Grifo of New York University was not tested on animals prior to being tried in a pair of infertile women. The university has approved the use of the method on as many as five women.

So far, the procedure yielded uncertain results. It failed in the first patient, who is 47 years old. The second patient, aged 44, is not scheduled for a pregnancy test until next week. The technique follows the Dolly method of inserting the DNA into a single cell egg for implantation. However, Dolly was created from the genetic material of an adult body cell provided by its mother, rather than combining genetic material from two different eggs.

Some scientists are critical of this method being put into practice. "It is tampering with nature," said one scientist. Transferring genetic material from one person's egg to another "never happens in nature," said Glenn McGee, a bioethics professor at the University of Pennsylvania. "Fertility research is today propelled by the ambitions of curious scientists and the desperation of infertile couples," says another scientist.

But others offer a more cautious assessment. Donna Lieberman of the New York Civil Liberties Union's reproduction rights project says: "It does not sound like genetic tampering. It is more like transferring the genes into a new environment."