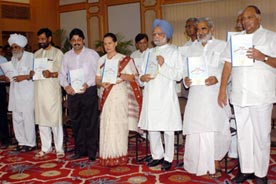 as the Congress-led United Progressive Alliance (upa) took the reins after handing out a shock defeat to the National Democratic Alliance in the recent general elections, Planning Commission officials went into a tizzy. Senior advisers were busy ferreting out information pertaining to the agenda set by the United Front (uf) government of 1996, which was propped up by the Congress. By May-end, the incumbent Union cabinet framed and adopted the common minimum programme (cmp) -- a template of the new dispensation's governance charter. Not surprisingly, the document harks back to the uf era, listing employment and agriculture as top priorities.

"The challenge remains the same with or without the focus: employment generation is easier mentioned in the cmp than effected in reality," says a consultant. To be sure, the cmp is plural in its content and inclusive in its character. Acknowledging the electoral verdict as a mandate for change, it redefines economic reforms by concentrating on basic livelihood issues in the villages and the institutional mechanism for effective utilisation of India's Rs 40,000-crore rural development budget. The document promises three crucial constitutional amendments to restructure governance. It also pledges a rethink on two controversial issues: the eviction of tribal settlers from forests and the river interlinking project.

"Contrary to popular belief, the electorate did not deliver a fractured verdict. Rather, it was a decentralised verdict. And the new government's agenda is in tune with this message," points out Yogendra Yadav of Delhi-based think-tank Centre for the Study of Developing Societies (csds). Indeed, a closer look at voting trends shows that the people bore in mind local matters such as livelihood and accessibility of basic necessities while exercising their franchise.
Among the most crucial, and also the stiffest, targets set in the cmp is the enactment of the National Employment Guarantee Act (see box: A tall order). The proposed legislation is to be enforced within two months. Under it, the government would initially provide a legal guarantee of at least 100 days of employment every year at minimum wages on asset-creating public works programmes, reveal sources in the Congress's economic cell. At least one able-bodied person from every poor and lower middle-class household will be eligible for the job. In the interim, a massive food-for-work programme will be started.

The real test would, however, be employment generation in rural areas. While about 100 million rural workers have to be accommodated, only 7-8 million jobs are currently provided through a dozen programmes. "This would require fresh thinking on employment generation avenues like agriculture and the non-farm sector," says Jairam Ramesh of the Congress, who was instrumental in drafting the cmp.
Yet another significant step highlighted in the cmp is the proposed increase in public expenditure on agriculture as well as credit flow to farmers. This is keeping in mind the unprecedented surge in farmer suicides in states such as Andhra Pradesh (ap), Karnataka and Punjab. The toll over the past six years has risen to more than 6000.