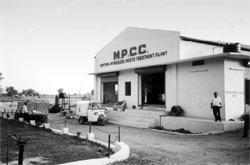 medical establishments in the country blindly setting up incinerators and mindlessly burning biomedical waste have become commonplace. But the recently inaugurated centralised biomedical waste treatment facility at Bhaunti near Kanpur in Uttar Pradesh -- the first of its kind in north India -- is likely to prove an exception. Experts, however, prefer a wait-and-watch approach, opining that though the plant is a step in the right direction, its success will depend on factors such as segregation of waste, participation of all healthcare facilities and proper monitoring.

The plant has been jointly established by the Kanpur Nagar Nigam (knn) and Medical Pollution Control Committee (mpcc), a Kanpur-based non-governmental organisation (ngo). "It is equipped with the latest technology to deal with all 10 types of biomedical waste specified in the rules," says Vinay Kumar Verma, secretary of mpcc.

The plant is equipped with a double-chambered incinerator, which can treat 150 kilogrammes of waste per hour. As it has two chambers, the waste is first burnt at 800c in the first chamber and then at 1050c in the second chamber. The thermoclave installed in the plant treats waste at high-pressured steam and disinfects them. "The thermoclave can treat all kinds of plastics at 120 c temperature which leads to complete disinfection," says M P Singh, a member of the mpcc. As per the biomedical waste rules 1998, incineration of polyvinyl chloride (pvc) is banned, but due to the high costs involved, many hospitals incinerate pvc rather than burning it in the thermoclave.

The disinfected waste is then shredded and dumped in landfills. All the liquid waste in the plant is again treated in the effluent treatment plant. "No treated effluent goes out of the plant as it is evaporated in a solar lagoon," adds Singh. "To ensure that the Bhaunti unit is utilised to its full capacity, no such plant should be constructed in Kanpur " says M D Girdhani, chief medical officer, knn.

But experts aver that procuring the best of equipment will not ensure safe disposal of waste. Segregation of waste is the need of the hour. Also, at present the plant is only catering to around 30 per cent of all healthcare facilities in Kanpur. Efforts should be made to cover all such units so that no biomedical waste is disposed of unscientifically.

Another weak link is that as per the biomedical waste rules, 1998, the state pollution control board can fine an errant healthcare facility Rs 5,000, but the municipal corporation can impose a charge of only Rs 500. "This is too low an amount to check the unscientific disposal of biomedical waste," says Girdhani.