The US senate rejected the country's first climate change bill in the last week of October. On the bright side, the proposed law sank by a 55-43 vote -- the margin of defeat being much narrower than the upper house's 95-0 thumbs down to the Kyoto Protocol through a resolution in 1997. Democrats see a perceptible softening of stance in the latest development 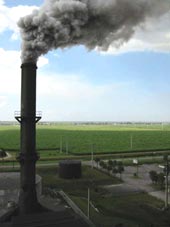 the us senate rejected the country's first climate change bill in the last week of October. On the bright side, the proposed law sank by a 55-43 vote -- the margin of defeat being much narrower than the upper house's 95-0 thumbs down to the Kyoto Protocol through a resolution in 1997. Democrats see a perceptible softening of stance in the latest development.

Titled 'The Climate Stewardship Act of 2003', the bill was proposed by senators Joseph Lieberman and John McCain. It is milder than the Kyoto pact on the emission reduction front. The proposed legislation requires the commercial, industrial, transportation and power sectors in the us to cut greenhouse gas (ghg) emissions to 2000 levels by the year 2010. Farms and residences are excluded. An earlier version of the bill also had a provision for the next phase, which involved lowering emissions to 1990 levels by 2016. Even as this clause had been struck off, it was supposed to be incorporated at a later stage.

A cap and trade market for carbon dioxide emissions is at the centre of the senators' proposal. Modelled on the sulphur dioxide emissions trading being carried out successfully in the us, the bill seeks to fix an outer limit for emissions. The companies overshooting this level can get emission credits from the ones that are complying with the norms.

"I believe that a voluntary ghg programme will, in the end, have little impact on reducing emissions. But cap and trade systems are effective, and are currently helping to curb acid rain," said Richard G Lugar, chairperson, us Senate Foreign Relations Committee. "These standards did not harm our economy as predicted originally by critics," he added. For their part, Lieberman and McCain have vowed to bring the bill back again and again till it is passed.

The us, responsible for over a quarter of the world's carbon dioxide emissions, rejected the Kyoto Protocol in 2001 as it was perceived to be harmful to the us economy. The fact that the pact exempted developing countries like India from reducing ghg emissions was also resented by the us.

Close on the heels of the voting on the climate change bill, came reports of the us administration trying to put off a policy document on changes in Arctic climate until after the 2004 presidential elections. The Inuit Circumpolar Conference Alaska (icc-Alaska), an international organisation representing the Arctic region's Inuit people, stated in a letter to the us state department: "It will surely appear to the Arctic Council that the United States intends to delay preparation and presentation of the policy document until after the (polls). In doing so, the (country) is opening itself to criticism that domestic political and electoral considerations override agreed ministerial directions. As a unilateral move by the (us) government, your action might even damage the Arctic Council itself."

The Arctic Council comprises eight nations, including Canada, Denmark, Finland, Iceland, Norway, Russia, Sweden and the us. It is preparing the Arctic Impact Climate Assessment, which will look at the past and present indicators of climate change in the region as well as at possible changes and impacts in the future. The assessment's policy document is due a couple of months before the March 2004 presidential elections. It will recommend coping and adaptation measures.