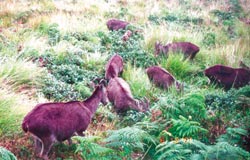 can feral goats actually survive on seawater? This is the crux of a controversy embroiling the ruminant that inhabits the volcanic Barren Island, situated 135 kilometres from Andaman and Nicobar Islands' capital Port Blair. Even as research conducted by the Central Agricultural Research Institute (cari) suggests that the animal consumes sparse foliage and saline water, a recent study has challenged these findings.

Over the past eight years, cari has been doing experiments to solve the livestock problem of drought-affected regions. The institute's scientists are convinced that feral goats could be reared and multiplied on several other islands facing an acute scarcity of freshwater. Their efforts had so far won them international acclaim, with many reputed journals publishing their research.

But doubts have arisen ever since a team of specialists from India and Italy carried out detailed geological, volcanological, geochemical and geothermal investigations on Barren Island a few months back. The group was led by D Chandrasekharam, department of earth sciences, Indian Institute of Technology (iit), Bombay.

During the expedition, the scientists discovered two freshwater springs towards the southeastern part of the caldera -- a huge deposit of ash and other molten material that spews out from the volcano. The springs, they believe, are the main sources of water on which the goats depend. The survey team asserts that it has exploded the 'feral goat and its seawater-drinking habit' myth. If goats can drink seawater, humans should also be able to do the same, contends Chandrasekharam.

Bruno Capaccioni, an Italian volcanologist who was also a member of the group, told Down To Earth that the feral goats' hoof marks were clearly visible near the springs. This proved that they consumed sweet water, he added. Mohammad Ayaz Alam, a researcher from iit Bombay, says that the latest study gives the lie to a claim made by the Geological Survey of India, too. "The organisation erroneously deduced that leaves of some plants fulfil the goats' drinking requirement," he remarks.

But cari continues to swear by its own research. R B Rai, director of the institute's Port Blair chapter, reacts thus: "We, too, found a freshwater spring at Barren. But merely locating such a source does not disprove our contention." Rai claims that the freshwater source exists on the island only for a few months. After that switching to seawater is the only option for the animal.

"Our team even brought a few of the goats to the laboratory. For a few weeks, they survived on seawater. Gradually, we started giving them freshwater as well. It was observed that whenever they were allowed to choose, the goats consumed salt water and freshwater in a 60:40 ratio," explains Rai. cari scientists are of the view that seawater enables feral goats to excrete larger amounts of toxic metabolites, which corrects the salt imbalance in these animals.

With the two sections of experts making contrasting statements, the need of the hour is to study the animal further. Simultaneously, however, a serious conservation effort should be got underway. According to a 1991 survey, the total population of the feral goat in the region was 200-250. At last count, there were less than 30 on the island!