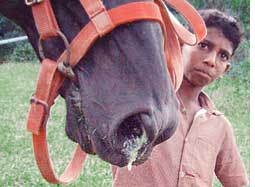 Even as the government banned animal movement, sick horses are falling prey to other diseases

equine influenza is threatening to assume epidemic proportions in India, with over six states, including Jammu and Kashmir, Delhi, Uttar Pradesh, Rajasthan, Maharashtra and West Bengal having reported an outbreak of the acutely contagious respiratory disease. Now Bangalooru seems to be the flu's latest target. Horse racing has been suspended in the affected states.

"The government issued an advisory to stop interstate movement of horses, donkeys and other equines for two months in the last week of October," said S K Bandopadhyay, commissioner (livestock) at the Department of Animal Husbandry and Dairying under the Union agriculture ministry. Veterinarians and animal welfare ngos claim that the disease could have been contained, had the government announced the restrictions earlier.


The origin of the flu has been traced to Jammu around the third week of July this year. Caused by strains of Influenza A virus that is endemic to horses, its symptoms include thick, yellow nasal discharge, dry deep cough, very high fever and loss of appetite. Hissar-based National Research Centre on Equines (ncre) on August 1 confirmed the virus's presence in horses from Vaishno Devi. However, no measures were taken to quarantine the diseased animals at that time. Owners kept transporting and using sick horses, aiding faster spread of the flu.

After afflicting more than 60 per cent of the 18,000 ponies/horses in Jammu, the virus travelled to western Uttar Pradesh and Delhi via migration, sale and purchase of animals. It was detected simultaneously in Matheran and Pune in the first week of October, said Amit Sharma, a veterinarian with the Mumbai-based ngo, In Defense of Animals. "Some horses brought to Matheran on October 4 from Yeola bazaar in Nashik were carrying this virus. Within no time the virus spread to 95 per cent of the horses," said P M Bhosale, a colleague of Sharma.

The disease was first reported in India in 1987. The entry of the virus was attributed to the import of horses from France. Then six states and two union territories had reported it and ncre had developed a vaccine for the flu. "We still don't know the strain that is causing it this year but we have recommended the use of the 1987 vaccine. We are sequencing samples received from Jammu and Kashmir and Delhi but developing a new vaccine may take six months to a year," A K Gupta, director of ncre told Down To Earth.


Veterinarians said quarantining horses was the only effective way to prevent the spread. Ideally, any horse/pony brought from elsewhere must be isolated for three weeks and confirmed uninfected before letting it mingle with healthy equines. But this is not done, nor are there quarantine stations for sick horses. "In case of Matheran, we had to reverse quarantine them, that is isolate healthy horses, since almost 95 per cent had contracted the flu. Even two weeks after the treatment, a horse remains a carrier of the infection," Sharma said. Unable to bear the cost of the recommended vaccine, veterinarians are subjecting the horses to symptomatic treatment. "Ninety per cent of the horses look like they are recovering after the treatment," added Bhosale.

Since these horses are weak, they are now contracting other diseases like trypanosomiasis or sleeping sickness as it is commonly called. A parasitic disease, its symptoms include fever, weakness, and lethargy. It is transmitted by the protozoa Trypanosoma brucei carried by the tsetse fly. "At any time, 10 to 15 per cent ponies are carriers of the protozoa. Normally, as they are sturdy they do not show any external symptoms. At present, the horses have weakened immunity as they haven't yet recovered from the flu. Hence they are easily falling prey to trypanosomiasis," explained Bhosale. Two horses have died of it in Matheran.

Other countries are usually quick to deal with such outbreaks. Last year, an outbreak of equine influenza was reported in Australia. The Australian government immediately cancelled all racings and banned transport of horses. It also set up quarantine stations and the the virus was contained within six months. India is yet to develop such horse sense.