A deadly strain of bacteria has developed resistance to antibiotics 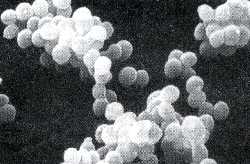 a dangerous bacterium that can pose serious threats to human life has developed resistance to antibiotics. The bacteria, called staphylococcus, can drain through intravenous lines or get into surgical wounds and destroy skin and bones, poison blood and lead to other complications. Earlier, penicillin, an antibiotic, was able to prevent the infection. However, the bacterium has developed drug resistance and crossed a stage where even vancomycin, the last answer to the infection, is unable to stop it.

William Jarvis, a medical epidemiologist at the Centers for Disease Control and Prevention ( cdc), usa, says that a strain of staphylococcus was found in a man at the Michigan hospital and even vancomycin could not kill the bacteria. The patient had been admitted to the hospital for kidney failure. For the last six months, he had been taking vancomycin to treat infections due to a catheter fixed in his abdomen for kidney dialysis. Doctors at the hospital had to take help of several antibiotics to bring the infection under control. About one year ago, a similar case had been reported in Japan when a baby got infected after heart surgery.

Nearly two million hospitalised patients are infected every year in the us by staphylococcus, which is about 13 per cent of the 80,000 lives it claims in the country. The infection can be received from blankets used by other patients, from hospital workers or by tubes inserted into the body.

Robert Haley, chief of epidemiology at the University of Texas Southwestern Medical Center in Dallas, says there is no reason to panic and the infection can be treated with strong drugs. Hospitals will have to take extra precaution so that the infection does not spread, he adds.

The researchers say that indiscriminate use of antibiotics to control the infection may raise the resistance of staphylococcus to drugs. In case too much antibiotic is used, some of the bacteria may survive and multiply.

Several companies are in the race to develop strong antibiotics that can help prevent staphylococcus infection. A drug called synercid has been developed that may soon replace vancomycin as the drug of last recourse.