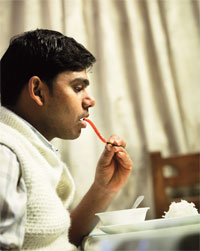 THE genome of a species of hot pepper or chilli, Capsicum annuum, has been sequenced. The sequence can now help improve the vegetable which is used for adding a pungent flavour to food. It will allow researchers and breeders to more effectively select traits that people enjoy and benefit from. The sequencing would help development of varieties with different flavour, texture, nutrition and colour. The varieties would also give higher yield and will be more resistant to diseases.

The research was led by Doil Choi, professor of plant science and director of the Plant Genomics and Breeding Institute at Seoul National University, South Korea. The variety sequenced is a domesticated strain of Capsicum annuum found in Morelos, a state in Mexico. This local variety, known as Criolo de Morelos 334, has high resistance to a range of plant pathogens and is widely used in research and breeding programmes. The research team also provided sequences for two more cultivated varieties, Perennial and Dempsey, and for a related habanero pepper species, Capsicum chinense.

The team looked for genetic influences that may underlie the hot pepper’s pungency, ripening process and disease resistance. They found different molecular patterns of ripening in hot pepper and tomato (a related genus). The results show that the pungency of the hot pepper originated through the evolution of new genes by duplicationÃ”Ã‡Ãªof the existingÃ”Ã‡Ãªones and changes in gene expression.

“Like most genome sequencing projects, the pepper genome, especially when compared to genome sequences of relatives (such as tomato and potato) provides some insight into how evolution (either through natural selection or domestication where selection has been guided by humans) has shaped the modern genome of the organism,” says James J Giovannoni, professor at the Boyce Thompson Institute for Plant Research, an independent non-profit affiliated with Cornell University, New York, US. He was part of the study.

“The hot pepper genome sets the stage for further studies using comparative genomics, metabolic engineering and transgenic approaches to unveil the complete pathway of capsaicinoid biosynthesis in capsicum species,” say the researchers in the paper published in Nature Genetics on January 19.

Capsaicinoids are responsible for the pungency in hot pepper and more than 22 of these compounds are already known. Capsaicinoids also have health benefits. They inhibit tumour growth, relieve arthritis-related pain and can be used for suppressing appetite during weight loss programmes.

The researchersÃ”Ã‡Ãªhope that in combination with the recently published tomato and potato genomes, the hot pepper genome will elucidate the evolution, diversification and adaptation of over 3,000 Solanaceae members, a family of flowering plants, which are adapted to a wide range of habitats, from deserts to tropical rainforests.

“The DNA sequence provides chilli pepper breeders a big boost in knowing what genes need to be present in a cultivar to optimise the desired phenotype,” says Paul Bosland from the Chile Pepper Institute, New Mexico State University. He was also part of the study. The availability of the genome sequence of Capsicum annuum will add to the toolbox of genomics-assisted breeders.

“Initially, the direct benefit of this finding will be for the pepper research community, followed directly by plant breeding companies. The consumer will benefit in five to 10 years, with the release of new improved cultivars which were not possible to breed without extensive knowledge about the genome structure and available genetic diversity,” says Richard Finkers, a plant breeding expert with Wageningen UR, a university and a research centre in the Netherlands.

Pepper is a rich source of vitamins, nutrients and natural colouring agents used extensively in cosmetics and pharmaceuticals. The annual global production of hot pepper is worth $14.4 billion.

According to United Nations Food and Agriculture Organization, the top 20 pepperÃ”Ã‡Ãªproducing countries grew 33.3 million tonnes of hot pepperÃ”Ã‡Ãªin 2011. In the last decade, production of hot pepper in the world has increased by 40 per cent.