Geothermal energy is gradually becoming a potential source of electricity 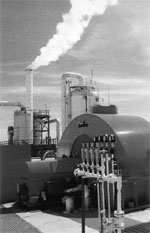 temperatures at the Earth's core, 6,500 kilometres below the surface, are nearly 5,000 c . This heat can be brought to the surface as steam or hot water and be used directly for heating or to converting electricity. Today, several countries use this geothermal energy for producing electricity. The us leads in geothermal applications as it uses the energy extensively to produce electricity.

Geothermal energy resources can be classified in five categories: hydrothermal, geopressured, magma, hot dry rock and earth energy. Hot water and steam that occur naturally form hydrothermal energy that is mostly used to supply heat for direct use or to generate electricity. Geothermal waters with temperatures of 10 to 150 c can be used to heat homes or greenhouses ( ft Energy World , January/February 1998).

Hydrothermal energy can be directly used in several ways. In the us , Klamath Falls in Oregon has one of the largest strict heating systems. Here geothermal water is piped under roads to keep them free from ice. Pipes carrying geothermal water have been installed under soil providing a longer growing season and faster growth of agricultural products. The direct use of geothermal resources across the world accounts for energy amounting to 11,300 thermal megawatts ( mw ). In more than 27 countries, these resources are used for direct heating, aquaculture, greenhouse operations and industrial processing.

This energy can also be used to generate electricity. Steam, heat or hot water from geothermal reservoirs are used by geothermal power plants to power turbine generators. Today, geothermal energy accounts for nearly 7,000 mw of electricity in 21 countries. The us alone produces 2,700 mw , which is equivalent to 60 million barrels of oil each year.

New Zealand has played a major role in developing geothermal energy in southeast Asia. In the early 1950s, with no oil and little hydropower on the North Island, New Zealand began to exploit its geothermal resources at Wairakei, the first large hot-water field ever developed. The government had planned to launch a programme to expand geothermal generating capacity to 1,000 mw per year by the first quarter of 1998. Whereas Mexico ranks third in geothermal power production.

Ironically, even after advancement in technologies to exploit geothermal energy, geothermal contributes to only one per cent of the world's energy. Presently, thousands of megawatts of power can be generated from already identified hydrothermal resources.