Global warming will lead to water scarcity in Asia 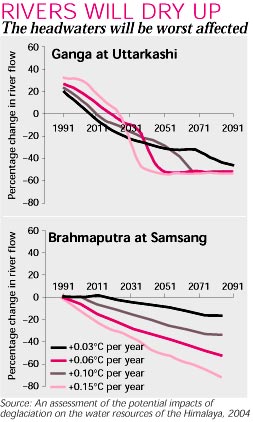 the major rivers of northern India and Pakistan will flow strongly for the next 40 years, but thereafter they will be reduced to a mere trickle. This is the message of the first decade-by-decade analysis of the rivers, which are fed by the glaciers of the Himalaya.

The analysis has been conducted by researchers from the Kerala-based Calicut University, New Delhi-based Jawaharlal Nehru University, Nepal-based International Centre for Integrated Mountain Development, and the uk-based University of Salford and the Centre for Ecology and Hydrology.

Several sites were studied -- six in the upper Indus basin, seven in the Brahmaputra basin and eight in the Ganga basin. The river flow was simulated for 100 years, with 1991 as the base year. The researchers considered variations in the levels of precipitation, evaporation and glacial melt rate to simulate their results. Changes during four temperature scenarios -- rise of 0.03c, 0.06c, 0.10c and 0.15c per year -- were projected.

As per the findings, initially the flow of the rivers would not be affected (under any temperature scenario). In some cases, it may increase -- with temperatures rising, glaciers will melt at a very fast pace, impacting the water flow. But in the long run, there will be no ice/snow left to melt; this will lead to the drying up of the rivers. The mean flow of the upper Indus basin is expected to increase by 14-90 per cent in the first decade, but it will decline by 30-90 per cent henceforth. The headwaters of Brahmaputra will also decline gradually. The situation will be no different in the Ganga basin (see graphs: Rivers will...). Surprisingly, the mean peak flow of the Kaligandaki river, which forms a part of this basin, will increase by 30 to 40 per cent even in the most extreme temperature rise.

The results also underscore the role of precipitation in protecting the glaciers from rapid ice mass loss: a thick covering of snow resulting from a strong monsoon would insulate the glaciers. But a weak monsoon would make a glacier more vulnerable. Catchments in the eastern Himalayas, which benefit from a good monsoon, are less vulnerable to global warming than those in the west.

The analysis highlights the need to develop the requisite mechanisms to tackle the crisis. But the researchers warn that the findings should not be taken "literally". "The results are of hypothetical scenarios applied to a conceptual framework. These conditions may or may not prevail," concludes the study team.