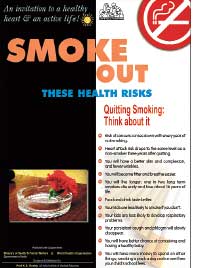 frisking came as a surprise to the employees of a company in Nagpur. It was not a security check. Cigarettes, gutka and tobacco packets of the employees were confiscated. It was not a blanket ban but the restrictions were as good as a ban. Unhealthy food was taken off the menu following tobacco.

who estimated 17.5 million global deaths related to cardiovascular diseases in 2005 of which 7.6 million were caused by heart attacks. For India, 2.6 million deaths have been predicted due to heart attacks by 2020. An excess of salt and oil in one's everyday food, along with habits like tobacco consumption can easily increase the risk of such diseases. Hence an intervention in one's lifestyle seemed essential.

As a first step towards designing a public health strategy at workplaces, a team of doctors led by D Prabhakaran, cardiologist with Centre for Chronic Disease Control, New Delhi, conducted a survey in 2001 at 10 industrial sites ranging from heavy electrical industries to tea gardens. The team identified the possible risk factors such as high blood pressure and high cholesterol levels. Based on the doctors' suggestions, six of the 10 sites agreed to introduce certain changes at their workplaces which were monitored over a period of five years starting from 2003. The Nagpur-based company was one of them with the other sites located in Hyderabad, Bengaluru, Thiruvananthapuram, Lucknow and Dibrugarh.


The food served in the canteen was the first to be regulated. Since this was a change at the policy level, the trade union was consulted. "The workers would have revolted if we tried to tinker with their food. The trade union had to explain the utility of these interventions first," K R Thankappan of Thiruvananthapuram's Sri Chitra Tirunal Institute of Medical Sciences and Technology said. A member of the team, he conducted the study at the Travancore Titanium Product Limited in Thiruvananthapuram.

The menu changed. Healthy oil was ushered in and butter was taken off the counter. Paranthas and puris no longer made it to special lunch. Salad was in. Samosas were off the snack menu. These changes reduced oil consumption 20-30 per cent. "Five servings of vegetables were recommended. Sweet dish like gulab jamun was replaced by fruits," said Prabhakaran, lead author of the study.

Next the workers were asked to set aside time for exercise. "The employees were encouraged to take the stairways whenever possible," said Goenka. Other measures, mainly to do away with smoking, included posters displayed across the workplace and health melas.

Not every industry was tackled in an identical manner. Stress was laid on what was lacking at a particular site. One site was a tea garden in Dibrugarh. "Here chewing of tobacco is prevalent. Only through talks could we encourage people to leave it," said P Khaund, chief medical officer of Assam Tea Company, Dibrugarh.

The project yielded results. On an average, the glucose levels of the workers at the intervention worksites reduced nine per cent and the good cholesterol levels increased 10 per cent. Tobacco consumption was down 10 per cent.

An industrial unit which voluntarily introduced a few changes for a year (voluntary sites), saw an increase in all the parameters; while the good cholesterol level increased, albeit four per cent, the glucose levels increased 13 per cent.

"Taking care of diet, exercising and reducing tobacco consumption will cost an employee only Rs 334 per year; drugs to treat cardiovascular diseases would cost between Rs 7,000 to 9,000 per year," said Shifalika Goenka, a co-author of the study and associated with the Public Health Foundation of India. The study was published in the Journal of the American College of Cardiology (Vol 53, No 8).


"This was a demonstration project and it has worked. But there were issues we could not address," said Prabhakaran. For a better understanding, he explained, at least 30 industries should have been studied.

Nevertheless, the project is an eye opener. "It dispels the myth that cardiovascular diseases are diseases of the rich. They are prevalent among the poor who come to cities and get used to an urban lifestyle," said Prabhakaran.