Pesticide exposure can lead to leukaemia in children 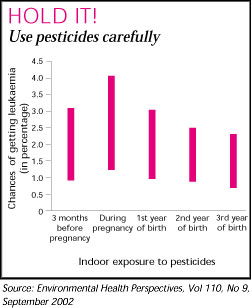 a study conducted on a very large-scale once again proves that pesticide exposure at home increases the risk of leukaemia during childhood. This was the finding of a study conducted by researchers from us-based University of California, California department of health services and Stanford University School of Medicine, usa.

During the study, the researchers studied 162 children suffering from leukaemia. An equal number of healthy children were also studied to provide comparative data. To determine the level of exposure, the study subjects were analysed on factors such as age, race, and mother's country of residence during pregnancy. As defined in the study, pesticide exposure resulted from, among other factors, professional pest control and the use of various products to control ants, flies and termites . Herbicide exposure was mainly due to use of weed control products.

The results indicate that use of pesticides three months before pregnancy, during pregnancy or during the first three years of birth could be directly linked with leukaemia. However, factors such as annual income of the child's family or exposure to herbicides could not be directly correlated to the cancer.

Moreover, outdoor exposure to pesticides was not found to be as harmful as indoor exposure. The study also indicated that pest control carried out by professionals considerably increased the risk, as more amounts of pesticides are used.