How effective are sanitisers? 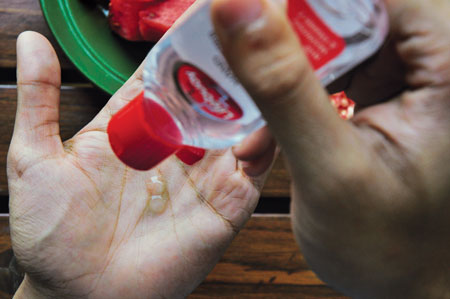 TILL swine flu panic gripped the world, washing hands was considered the best way to maintain personal hygiene and protect oneself from diseases. But as fear of the disease spread, so did hand sanitisers. They became a prefered choice because of their mobility and convenience. All you need to do is squirt a drop of it onto your palms, rub it, and you are done. But now the integrity of that handbag-sized bottle designed to kill any germ is in doubt. It might be offering a false sense of security.

A study published online in American Journal of Infection Control in March suggests use of alcohol-based hand sanitisers over soap and water for routine hand hygiene may be associated with the increased risk of norovirus outbreaks. Norovirus causes acute gastroenteritis.

The study was conducted to explain an increase in norovirus episodes in northern New England in the US between December 2006 and March 2007. Researchers from Centers for Disease Control (CDC) surveyed long-term healthcare facilities in Maine, New Hampshire and Vermont. They found that in facilities where people were equally or more likely to use alcohol-based sanitisers, instances of norovirus outbreaks were more.

CDC alongwith World Health Organization (WHO), is promoting the use of sanitisers and has published guidelines that emphasise the efficacy of hand sanitisers when compared to handwash. Page 33 of WHO’s guidelines on hand hygiene reads, “A systematic review of publications between 1992 and 2002 on the effectiveness of alcohol-based solutions for hand hygiene showed that alcohol-based hand rubs remove organisms more effectively, require less time, and irritate skin less often than handwashing with soap or antiseptic agents and water.” The researchers in their study made it clear that the results are independent and should not be compared with the views of CDC.

Recently, Dipshikha Chakravorty, a scientist with the Centre for Infectious Disease Research and Biosafety Laboratories, Indian Institute of Science, Bengaluru, also analysed the safety of hand sanitisers. In her article, published in the March issue of Current Science, she notes that though sanitisers kill bacteria and viruses, their molecular patterns remain intact.

These patterns, called pathogen associated molecular patterns (PAMPs) include lipopolysaccharides, DNA and RNA. The article points that when food is eaten with the same hands, the gut gets exposed to these PAMPs which can activate the intestinal epithelial cells and intestinal dendritic cells. This can lead to bowel disorders. “There is no data so far to indicate that the important molecules or ligands generated by the pathogen are inactivated by hand sanitisers,” the article states. Hence the practice of solely using hand sanitisers can be detrimental in future, it adds.

Apart from this there have been reports, especially from the West, about an increase in hand sanitiser-related accidents among children.

According to the data from American Association of Poison Control Centers, Virginia, a total of 68,712 hand sanitiser accidents have been reported from 2005 to 2009. Eighty-one per cent of these exposures occurred in children less than six years of age. In India, though, such incidents are rare. “We have not come across any sanitiser-related poisoning,” says C Rajendran, director of Poison Control, Training and Research Center, Government General Hospital in Chennai.

What are they made of?

The mode of action of both the sanitisers is more or less similar. They denature protein of microbes. Alcohol also denatures lipids and causes dehydration in bacteria. Quats, on the other hand, has the capacity to denature cell membrane and protein. What sets quats apart from alcohol is that it can act on a broad range of organisms. Besides, benzalkonium chloride has been in use in disinfectants and antiseptics for more than 50 years. 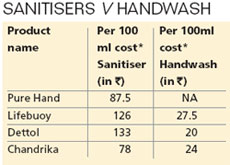 According to Environment Working Group, an American non-profit, ethanol is toxic and carcinogenic. It can lead to irritation in skin, eyes and lungs. Benzalkonium chloride can cause asthma and skin diseases. However, it is less toxic and drying when compared to alcohol. But the cost of alcohol-based sanitiser is almost half of a non-alcoholic ones. Moreover, the price of hand sanitiser is much higher than that of liquid handwash (see box).

Though the trend of using hand-sanitisers picked up in the US and European countries almost a decade ago, in India they have been in use for the past four-five years. According to a survey carried out by Nielsen—a global information and measurement company—sales of hand sanitisers in the US soared 245 per cent during the swine flu scare. “In India, the use of hand sanitisers is rising with change in lifestyle.

Our research shows that the use of the sanitisers is growing at 20 per cent per year,” says Prahlad Patki, head of herbal giant Himalaya’s medical services and clinical trials. Major hand-sanitiser products in the country are alcohol-based. Himalaya was the first to introduce a hand sanitiser in India in 2004. It is herbal, but not alcohol-free.

“The product has grown almost four times,” says Patki. It contains extracts of herbs like dhanyaka (coriander), nimbuka (lemon)—known for its antimicrobial activities—and hrivera (vetiver), known for its moisturising properties.

Another popular sanitiser is Hindustan Unilever’s Lifebuoy. The company claims its product disrupts bacterial cell membrane and outer protein coat of viruses thus, killing them. “It has been proven to kill the H1N1 virus and 99.99 per cent germs,” says their company spokesperson.