How enabling is ICT?

In February, 100-odd people got together at the quaint little town of Baramati. All had a common goal: to exchange ideas on the use of information and communication technologies (ICT) for development. Tucked away in the heart of south Maharashtra's sugar belt, Baramati has, for four years now, played host to what is called the Baramati initiative on ICT and development. And for the first time the annual event had a theme: Connected for Development: Information Kiosks and Sustainability. "This is our annual pilgrimage," is how Akhtar Badshah describes it. Badshah is the president of Digital Partners, a US-based non-profit body and one of the co-organisers 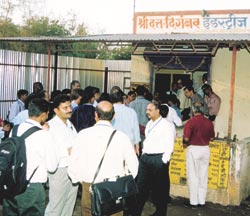 In February, 100-odd people got together at the quaint little town of Baramati. All had a common goal: to exchange ideas on the use of information and communication technologies (ICT) for development. Tucked away in the heart of south Maharashtra's sugar belt, Baramati has, for four years now, played host to what is called the Baramati initiative on ICT and development. And for the first time the annual event had a theme: Connected for Development: Information Kiosks and Sustainability. "This is our annual pilgrimage," is how Akhtar Badshah describes it. Badshah is the president of Digital Partners, a US-based non-profit body and one of the co-organisers. The other was Vidya Pratishthan's Institute of Information Technology (VIIT), located on the outskirts of Baramati town.

Why Baramati? "This place is an eye-opener," says Badshah. "The whole idea was that ICT professionals would come here, debate various issues and come up with solutions. We wanted to learn from experiences from all over the world, create an environment where people could network and showcase social entrepreneurs doing good work," reveals Sadanand Sule of VIIT.

The conference kick-started with a discussion on where ICT projects for development are headed. "Earlier, most projects used to concentrate only on technology and not on capacity building. Get a computer and, voila, everything will start with magic. Technology cannot alone change things," says Dwight Wilson, executive director World Corps, a US-based non-governmental organisation (NGO). Various ICT projects initiated by NGOs, government agencies, social entrepreneurs and corporate sector were showcased at the three-day event. On the first evening, participants toured villages in the area, to see actually operative information kiosks. It was an exciting experience. But a question remains: how successful has the Baramati experiment with such kiosks been?

Down To Earth profiles the ICT-development interface: the first in a series

The concept of setting up information kiosks in rural areas around Baramati evolved as a viit initiative to take ict to rural areas. The project took root in early 2002. January 2003 on, kiosks were set up in 20 villages. "We provide wireless internet access using the wireless in local loop technology, Cor dect," says Amol Goje, director, viit. "This provides complete wireless access solution with seamless integration of both voice and 35/70 kilobytes per second (Kbps) internet access to wireless subscribers." The kiosks are equipped with a personal computer (pc), power supply and Internet connection and a suite of packaged software in the local language (Marathi). Services provided include both online and offline services, such as, respectively, agricultural information and e-mail and photo studio and matchmaking services. viit is the local service provider (lsp). The technology is being supplied by n-Logue Communications (p) Limited, a Chennai-based company. "In coordination with the lsp, n-Logue sets up an access centre to provide last mile access. These access centres would, in size and scope, be small enough to be managed by people who do not need to be telecom experts. They would handle around 500-1000 customers in a radius of 25 km (around 2000 sq km)," informs John Paul, Marketing & Applications, n-Logue Communications.

The beginning was not easy. The hardware cost Rs 52,000, beyond the reach of most villagers. So the state's agriculture department was roped in. It agreed to provide 50 per cent subsidy for the first 20 kiosks, as part of a scheme called Krishi Mahiti Kendra (Agriculture Information Centre). These subsidised kiosks were to work as hubs of information on agriculture. The department identified villages, and the people who would receive the subsidy. And this is where problems began. "Ideally the subsidy should have gone to the unemployed youth or other such people because they would have a stake in successfully running the kiosk. But this was not to be," says a viit official.

As a result, hardly 3-4 kiosks are actually working. Most individuals who got the Rs 26,000 subsidy were already well off. "All these people had no intention of operating the kiosks. They just wanted subsidised hardware," says the viit official. Most of the doled-out pcs are being privately used. About 10 village public kiosks have now become private property. The beneficiaries also included a few gram sabhas: these are faring the worst. "None of the pcs at the gram sabhas are operating. In any case the gram sabha never had the motivation to operate the kiosk and the hardware is collecting dust," says the official. Kiosk subsidies were given to cooperatives and micro-finance groups, but here too the hardware has been appropriated. "We had started with the idea of setting up information kiosks and this has not been very successful. This has been a learning experience for us," says Sule. "One of the biggest challenges has been capacity building, for the project staff, and villagers as well," adds Paul.

viit has, however, not given up hope. Last month the institute wrote to the agriculture commissioner, listing the non-functioning kiosks. "We have been promised that surprise checks will be undertaken and non-performing kiosks will be shifted to alternative sites," says the official. Enthused by successful kiosks (see box on previous page: Some kiosks work), viit has drawn up a list of individuals who want to run such centres in other villages. This time, there will be no subsidy. "Most of those identified are young and eager and have taken loans just to open a village kiosk. Such people will make sure the kiosks work," says the official. "We will go this route and definitely set up more kiosks. I feel they will work," says Sule. Meanwhile, villagers around Baramati gear up for the benefits of ict to reach them and change their lives.