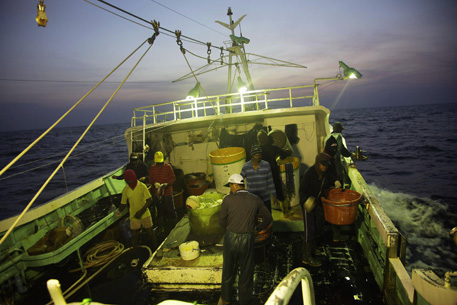 Foreign vessels are illegally fishing in Indian waters and not only causing huge losses to the country’s exchequer but also affecting the living of domestic fishermen, alleges Greenpeace. In its report ‘Licensed to Loot’ released on March 13, the non-profit, claims that several vessels of foreign origin are misusing the Letter of Permit (LoP) scheme of the Indian government to exploit lucrative Indian fish resources.

Under the Indian Exclusive Economic Zone (EEZ), only registered Indian fishing vessels can operate. But the LoP scheme of Department of Fisheries allows Indian fishing firms to buy technologically advanced foreign vessels. Under the scheme, the permission for a foreign vessel to operate in Indian EEZ is issued once it surrenders its registration in the country of origin and 10 per cent of its cost is paid by the Indian firm to the original firm. The vessel is supposed to employ 25 per cent Indian crew. Within three years, the Indian firm is supposed to completely own the vessel and the majority of the crew has to be Indian. Currently, 79 vessels are operational under the scheme in Indian EEZ.

Greenpeace alleges that many of these vessels continue to be registered in their country of origin and are controlled by the foreign firms. It found that at least eight vessels operating under the LoP scheme in Indian EEZ are also registered in Taiwan, their country of origin while two of them had Tuvalu National Registration. “The Indian firms are just the proxy owners that are paid commission for the huge profit made by the original firms that sell Indian fish in the international market,” says Areeba Hamid, Oceans Campaigner at Greenpeace India.

Dual registration is illegal as per the guidelines of LoP scheme. The Greenpeace report highlights that to circumvent this rule the original vessel owner registers their vessels to a shell company in a country where dual registration is allowed. This new registration is then surrendered to the Indian Mercantile Marine Department to obtain clearance to fish under the LoP scheme. “Since the LoP rules specify that proof must be furnished and at least 10 per cent of the value of the vessel be paid by the buyers to the sellers, the vessels are also allegedly undervalued,” the report adds.

The report also blames the authorities for ineffective monitoring, control and surveillance of such vessels. The LoP guidelines require all vessels registered under the scheme to send their positions on voyage reports to the nearest Coast Guard office regularly. They are also required to submit their reports to the Fisheries Survey of India. However, in both the cases it was found that the reports were not submitted.

The report also points out that to maximise timeout at sea and reduce the fuel cost these vessels off-load their catches to another ship at instead of landing them at the Indian port. The process called trans-shipment is illegal in some regions. However, in India there is no restriction on trans-shipment from LoP vessels.  “Since such vessels retain their original registration, they are essentially Taiwanese vessels taking one of the most sought after fish species from the Indian EEZ and exporting it to lucrative markets in Japan without the Indian government earning anything in exchange. These catchers are treated as Taiwanese catches since they trans-ship at high seas and there is no real way of verifying the amount and variety of fish being imported,” states the report.

Meanwhile, Tarun Shridhar, joint secretary in the Department of Fisheries, says the report is not completely based on facts. “The licences under the LoP scheme have been issued to around 80 vessels but currently only 19 are operational. We have got specific complaints about the dual registration of a few vessels and have asked the Director General of Shipping and Coast Guards to investigate in the issue.” He adds, if the violations are found, serious actions will be taken against those vessels.

The economic losses caused by this are huge, estimates the report. Indian EEZ sustains one of the last healthy Tuna populations in the world. According to the industry estimates a Tuna long liner LoP vessel catches 200 to 250 tonnes of the fish in one season. The total annual catch of one such vessel thus comes to around Rs 630 crore. In return, the public exchequer receives a miniscule proportion through deposition fee of Rs 10,000 and some taxes levied on the catch. Besides, due to over exploitation of Indian waters by the LoP vessels, the catches of local fishing communities are constantly declining.

Indian Fishing communities for long have been demanding the LoP scheme to be scrapped. “The scheme has yielded very little either in terms of revenue, employment generation or the actual development of an indigenous deep sea fishing industry,” says V Vivekanandan, advisor, National Fishworkers Forum and South Indian Federation of Fishermen Societies. It instead causes deterioration of fish population levels and local marine ecosystems, he adds.

About the demand of fishing communities to scrap the LoP policy, Shridhar says, “There can be problems with any policy. We will bring the issues brought out by the Greenpeace in the inter-ministerial meeting and take a decision accordingly.”