How green is budget?

No incentive for buses, no brakes on diesel cars

THE Union budget has announced its usual palliative for inclusive growth and aam aadmi. But the urban aam aadmi loses all. 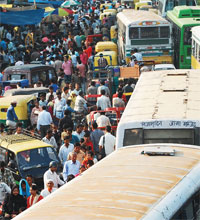 Despite loud protests this year, especially from the environment minister who condemned the misuse of under-taxed diesel in cars and SUVs, the finance minister could not summon courage to increase taxes on vehicles. He is willing to forego revenue to support this luxury use. The proposed tax cuts on hybrid, electric vehicles and fuel cell cars—fancy of the rich—though well intended, cannot deliver real benefits if the status quo on diesel cars is maintained. Most stark is the neglect of buses, the vehicle of the masses. Financial assistance is available only for a few lines of expensive metro in Delhi, Mumbai, Chennai, Kolkata and Bengaluru.

This is the green budget for the polluted, congested and energy-constrained Indian cities where three-quarters of people earn less than Rs 85 a day. The finance minister is blinded by the growth story of the Indian automobile market and applauds it as “the second fastest growing in the world” which has shown nearly 30 per cent growth this year.

He is silent on how motorisation might worsen the impact of the oil crisis on an economy which is 80 per cent dependent on imported oil. The Central government simply gives up responsibility for bus transport that meets 40 to 60 per cent of the travel needs in key cities. It is content with the past gesture of one-time grant for 15,260 modern low-floor and semi-lowfloor buses under the 2009 stimulus package. The finance minister said “this has transformed the urban transport across India” and offered no more tax concession for buses or schemes to scale up bus transport.

The auto industry stands to gain from the finance minister’s overall growth mantra that puts brakes on the rollback of the fiscal stimulus. The minister has done so “to improve business margins and translate that into higher investment rates.”

There are now worries about auto industry extracting more concessions from the tax reform package. The finance minister has promised to stay on course to phase in the proposed flat tax rates under goods and services tax (GST) and “maintain the standard rate of Central excise duty at 10 per cent.” If the country and Parliament are not vigilant the auto industry will try to get the same 10 per cent GST on all passenger vehicles regardless of size, engines or emissions performance. The only check of 22 per cent excise and special duty on big cars and SUVs will also go.