How long will life on Earth survive?

Scientists say events like volcanic activity, an expanding sun, asteroids or a freezing core may bring about destruction 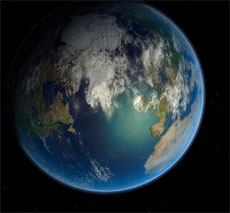 Life began on Earth billions of years ago, after the planet cooled down sufficiently and water became available. Every form of life has flourished on our planet, right from tiny bacteria to complex animal forms, as Earth has a hospitable climate and breathable air.

However, as science makes progress and tells us of solar systems beyond the one we know, one wonders if life will ever come to an end and what will happen to the planet. From predictions of the “apocalypse” by religions and tribes to fantasy books and science fiction films, people have expressed their own ideas about how the planet will be finally destroyed. But here is what science says about the end of life:

Will volcanoes bring about doom?
According to a news report, the end-Permian mass extinction that occurred some 250 million years ago obliterated 85 per cent of all land species and 95 per cent of aquatic life. Though no one is sure about what happened, there is a possibility of volcanic activity on a large scale. Today, we are well aware about the destructive power of active volcanoes.

At the time, Siberia experienced such a sustained period of activity that lava smothered an area eight times the size of the UK.

According to scientists, we do not know when such an activity will happen again, though the possibility exists. Researchers feel that even though volcanic activity does not finish life, its after-effects will. However, there is a possibility of some life forms surviving the catastrophe.

Threat from asteroids
We all know that a massive asteroid contributed to the extinction of dinosaurs. However, the good news is that impacts on such a scale are rare as big rocks may strike the Earth only once in every 500 million years. Mass extinction is also possible if a rogue planet hits the earth. Some scientists think our planet was hit by a rogue planet soon after it formed and the resulting cloud of debris formed the moon.

The core may freeze
Some researchers think that the Earth’s magnetic field deflects ionising particles from the Sun which would otherwise wear away our planet’s atmosphere. If they are right, then without a magnetic field, our planet will lose its atmosphere, bringing an end to life.

According to scientists, something like this may have happened on Mars, which is now no more hospitable. Scientists say that the Earth’s magnetic field is in the process of flipping direction sometimes. These flips have happened periodically for millions of years.

“If the field reverses, this doesn't mean that it dies out completely,” Richard Holme of the University of Liverpool in the UK was quoted by the BBC as saying. The flip might well do odd things to the magnetic field but “wouldn’t greatly disrupt life,” he added.

According to scientists, the good news is that the Earth’s magnetic field will not disappear any time soon.

Gamma-ray burst
Gamma-ray bursts (GRBs) are formed by intense explosions in space, for instance when a giant star explodes or two stars collide. They can last for a fraction of a second to several minutes. Theory says a long GRB can obliterate the planet’s ozone layer, exposing all life forms to ultraviolet radiation from the sun.

According to a research paper published in Physical Review Letters last year, powerful stellar explosions may have caused mass extinctions on Earth and could also have prevented life from appearing on other planets until 5 billion years ago—and then, only in the outskirts of galaxies.

It says that a GRB is an intense flash of radiation from a dying star that could damage or eliminate life on a planet which is light years away. According to astrophysicists, there is a 60 per cent chance that a GRB caused an extinction-level event within the past billion years. Looking beyond Earth, the team found that life is more likely to appear in the outer regions of a galaxy where such occurrences are less common, the paper reads.

If such a thing occurs, humans would be wiped out, but other forms of life would exist, according to scientists.

A study in The Astrophysical Journal Letters says that passing stars can trigger comet showers and potentially end life on Earth. However, scientists say probably all life would not be destroyed.

Expanding Sun
An expanding, hotter sun may spell doom for Earth. With the passage of time, the amount of Sun’s radiation will increase. This will heat the surface of our planet to the point when oceans will start boiling and all water will evaporate. As the Sun heats up, it will wipe out all life forms.

The Sun will also expand and become a giant swollen star. Once it is so, it will gobble up Earth. However, scientists feel that the planet may escape and if there are humans around they may shift the planet to a safe location.

A study published in SpringerLink says that the Sun's gradual brightening will seriously compromise the Earth's biosphere. However, if the Earth’s orbit migrates outward, the biosphere could remain intact.