How microbes cope up with variations in temperature 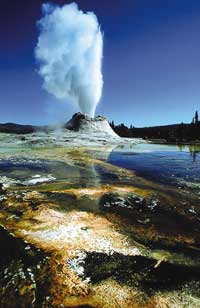 how do microbes adjust to wide variations in temperature? To understand this, a team of scientists led by Avigdor Scherz of the Weizmann Institute of Science in Israel compared two different kinds of photosynthetic bacteria -- one found in moderate environments and the other near hot springs. The study found that a switch in just two amino acids (the building blocks of proteins) can make a difference between functioning best at moderate temperatures and adapting to extreme heat.

The team analysed an enzyme reaction necessary for photosynthesis. It found that in both cases the reaction rate peaked at a certain temperature after which it remained steady. For each bacterium, the peak occurred well below the temperature required for their normal growth. A comparison of the enzymes revealed differences in two of the hundreds of amino acids making up the enzymes.When they replaced these two amino acids in the enzyme adapted to moderate temperatures with those of the heat-loving enzyme, they observed almost a 10c increase in the average temperature at which the reaction rate peaked. "This study shows that enzyme efficiency is tuned to the average temperature of the bacterial habitat, rather than the immediate conditions. This may protect the cells from harmful swings in enzyme activity," says Scherz. The study appeared in Nature (Vol 442, No 7104, August 17, 2006).

"We can envision using this knowledge to facilitate enzymatic reactions in different applications and enhance crop production in areas subject to extreme temperature changes," he adds.