How much of the world did the muskox see?

Recent evidence suggests that the muskox, believed to have become extinct 10,000 years ago, may have actually survived till much later. 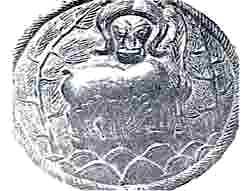 THE ASIAN muskox was believed to be one of the species that became extinct about 10,000 years along with mammoths and other large mammals, when the Ice age or Pleistocene came to an end. But now, the discovery of a few skulls of the muskox and plaques depicting the animal suggest it may have survived until a few centuries ago -- maybe even into this one (BBC Wildlife, Vol 11, No 6).

Two silver plaques depicting the muskox found in 1924 in Mongolian burial tombs dating back to BC 1 show the mammal survived till at least 2,000 years ago, says Nikolai Spassov, curator of mammals at Bulgaria's National Museum of Natural History. He dismissed an earlier interpretation by a German scholar, W Soergel, who said the depictions were composites with the head of the Asian muskox and the body of the takin, a large Tibetan horned ruminant.

Soergel had proposed that the artists of the time, who had made the plaque, might have known what the head of the Asian muskox looked like through fossil skulls. But Spassov says composites were usually set in a symbolic context and such symbolism is not present in the Mongolian plaques, both of which show the animal in its natural setting.

Support for Spassov's theory that the muskox had survived till a few centuries ago comes from the discovery of two skulls of the animal in Siberia. Two radiocarbon datings of the skulls put their age at 3,800 and 2,900 years, both figures being quite low as compared to the presumed extinction about 10,000 years ago.

According to Spassov, the skulls belong to an original Pleistocene population that persisted in Europe and Asia and continued to evolve until extinction in recent centuries.