How old is the universe? 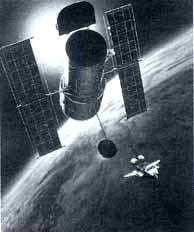 The age of the universe is an enigma that only becomes more puzzling with time. If the Big Bang theory, the raison d'etre of the universe, is to be believed, then it should be 15-20 billion years old. But 2 recent measurements, one by the earth-bound Kitt Peak telescope at Mauna Kea in Hawaii, and another by the space-bound Hubble Space Telescope (HST), suggest a universe just about 8 billion years old. And since some stars are reliably estimated to be 16 billion years old, the new findings present a most disturbing paradox for cosmologists (Nature, Vol 371, No 6496).

Customarily, the age of the universe is measured by the Hubble constant, which is the ratio of the velocity of receding, distant galaxies to their distance from Earth. The higher the value, the younger the universe. Both the telescopes looked at extremely distant stars called Cepheids in different galaxies, whose brightness varies periodically. The period of a Cepheid varies with its brightness with clocklike precision, so such stars are excellent indicators of distance. These telescopes revealed a higher value for the Hubble constant than was earlier estimated.

The high value of the Hubble constant poses many a riddle for the ever-ingenious theorist. For a start, it challenges theories explaining the emergence of matter in the universe. As it is, cosmologists have been hard put to explain how even in the allotted time of 15-20 billion years lavishly offered by the Big Bang theory, the universe evolved from almost nothing to such a messy and disorganised present-day structure.

Furthermore, scientists are still puzzling over the so-called "dark matter" to account for the gravity needed to cement such a vast cosmic family. To explain these mysteries, they have theorised an inflating early universe churning out matter faster than usual and exotic particles, called WIMPS (Weakly Interacting Massive Particles), that could fill up the gravity gap. However ingenious, these explanations still fall in the realm of speculation. So if the universe is really younger than earlier estimated, these problems should become even more intractable.

According to astrophysicist Craig J Hogan of the University of Washington at Seattle, not even the open universe model -- a universe which is endowed with an insatiable wanderlust, as opposed to the prodigal son who returns home after much roving. In that case, theorists will have to either revise the estimates of age or reintroduce into the cosmic equations what Einstein once dubbed as "the greatest blunder of my life". The factor is called the cosmological constant, a kind of antigravity force -- or call it a massive "fudge factor", which Einstein proposed to explain the discrepancies in his equations describing an open universe.