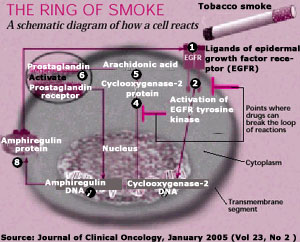 us scientists investigating the carcinogenic effects of tobacco smoke have, for the first time, uncovered the intricate cascade of reactions it triggers, leading to cell proliferation -- the genesis of tumours. Based on this knowledge, a research team from Cornell University and the National Cancer Institute in Bethesda, Maryland tested a drug that interrupts the chain of reactions and reported it might prevent cancers of the aerodigestive tract (from the mouth till the stomach).

The study findings, published in a recent issue of the Journal of Cancer Research (Vol 65, No 2), indicate serious consequences for passive smokers, too. "Passive smokers are also at risk because the smoke sets off similar reactions in their bodies. Nicotine per se doesn't cause cancer, it is the poly cyclic aromatic hydrocarbons in the smoke (produced when a cigarette is lit) that is carcinogenic and stimulates other carcinogenic reactions," comments P K Julka, professor, department of radiology and oncology, All India Institute of Medical Sciences, Delhi.


Smoking causes inflammation, or symptoms such as irritation and swelling, along the aerodigestive tract. The us team of scientists, led by Andrew J Dannenberg, director of cancer prevention, Weill Medical College of Cornell University, took a close look at what happens at the cellular level (see diagram: The ring of smoke). They found tobacco smoke increases the release of two ligands (which are complex protein molecules) called amphiregulin and transforming growth factor- a . As a result, the two ligands seek out a protein called epidermal growth factor receptor (egfr) tyrosine kinase, which is located on the cell membrane. When ligands attach to it, the inactive egfr gets activated, setting off the dna -- the central control of the cell -- to issue some important commands to its menial -- messenger rna (ribonucleic acid), or m rna. The instruction is to ensure the formation of an enzyme called cyclooxygenase-2 (cox-2), which has been linked to the development and progression of cancer. An important finding of the study was an almost four-fold increase in the production of cox-2 in active smokers (in the mucous lining of the mouth, to be precise) when compared with non-smokers.

Other cell constituents clamour to be part of the (self-injurious) action. cox-2 picks out a type of fatty acid called arachidonic acid and converts it into prostaglandin, also a fatty acid. A certain level of prostaglandins is already present in the cell and is essential for normal cellular processes. But smoking increases the levels of prostaglandins which then start producing more of amphiregulin and transforming growth factor- a, and the cycle of reactions starts anew.

The role of prostaglandin is crucial. It induces proliferation (increase in the number of cells), followed by angiogenesis (as the cell begins to proliferate, the blood vessels and capillaries will also grow in number to provide nutrition to the growing tissue) and finally lead to anti-apoptosis (arrest of cell death). When the natural process of cell death is stopped but the new cells keep on being formed, tumour formation occurs and this eventually leads to cancer.

After discovering the series of reactions, the scientists tested a cancer drug -- ag 1478 -- and found it inhibited the production of both cox -2 and egfr tyrosine kinase. But it is too early to say whether it would be safe to use. Although, "there are other drugs like celecoxib that inhibit cox -2, and drugs such as gefitinib and tarceva (potential inhibitors of egfr tyrosine kinase) are still under trial, more research is required to know about their side effects as we are still evolving the process of carcinogenesis," adds Julka. The study provides a mechanism-based rationale to evaluate whether a selective inhibitor of cox -2 or egfr tyrosine kinase used alone or in combination can prevent the onset of tobacco-related cancer.