How to curb neuro disorders 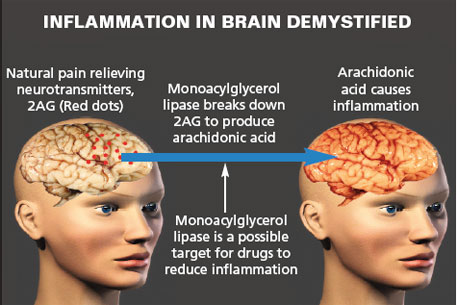 IT IS always the one closest to us who hurt us the most. Our body also faces onslaught from its very own defense mechanism. Remember the burning, redness and swelling that came soon after the deep cut in your hand? This is the body’s normal response, called the inflammatory process, designed to heal the afflicted tissue.

Healing of a wound requires an increase in the number of cells to replenish the lost cells. It also requires the immune cells to migrate to the wound to fight infection by possible pathogens. This process of inflammation creates a micro-environment conducive for healing afflicted tissue.

To study the progression of neurodegenerative disorders and the role inflammation plays in it, a group of researchers used a mouse model for Parkinson’s disease, a neurological disorder. They found that removing or inhibiting a brain enzyme called monoacylglycerol lipase (MAGL) provided protection from the disorder. The neuroprotection came from a unique place—the brain’s cannabinoid system, which makes and processes endogenous cannabinoids. These are chemicals similar to marijuana.

Further investigation revealed the neuroinflammatory pathway. MAGL breaks down a cannabinoid to produce free arachidonic acid (AA). “Inhibiting MAGL reduces AA levels in the brain. AA is the precursor of prostaglandins, which play a major role in inflammatory processes,” says A H Lichtman, professor at the Virginia Commonwealth University and co-author of the article that appeared in Science Express on October 24.

“We found that inhibiting MAGL can indeed reduce neuroinflammatory states,” he adds. Inflammation, following an infection, induces cell proliferation and an environment that promotes cancer. Stomach cancer is often preceded by Helicobacter pylori infection, that first causes ulcers, lung cancer is preceded by emphysema or asthma, cervical cancer by human papilloma virus infection. Inflammation of the liver, or cirrhosis, is the cause for up to 90 per cent of the liver cancer cases.