Howl of the hills 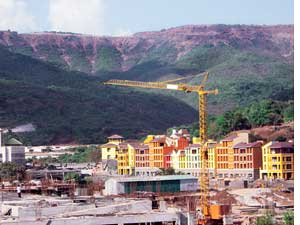 Land grab and dubious political links cloud "free India's first and largest hill station". Spread over 5,058 hectares (ha), the hill station Lavasa is coming up on the backwaters of government-owned Warasgaon dam in the Western Ghats, about 65 km from Pune. Billboards and hoardings along the Mumbai-Pune expressway, screaming out "Lavasa amidst seven hills with a 60 km of lakefront", are hard to miss. Lavasa Corporation Limited, a subsidiary of Hindustan Construction Company Limited (hcc), is developing the project with plush promises of a dream abode. Scheduled to finish by 2021, the first phase, Dasve town, may become operational by mid next year.

The company's dreams, however, have become a nightmarish experience for 18 villages from where the land has been "acquired" to develop Lavasa.These 18 villages, mostly inhabited by tribals, are spread out in the Mulshi and Velhe taluka of Pune district. On speaking to villagers, Down To Earth (dte) found that most tribal families had had similar experiences cheated by local agents, land records changed (see table Owner switch), loss of land, bouncing of cheques, threats and living in constant fear. Mugaon (in Mulshi) is the only one among the 18 villages that has gathered some strength to fight the project. All the 100 families there have lost their land to the company.


Company officials term these allegations "baseless". "We have the full cooperation of the local people, and have managed all land acquisition smoothly. People understand that they will gain through the development of this hill station," says a spokerperson of the Lavasa Corporation. On the criticism that the project is drawing, he adds, "A project of this magnitude will always attract attention." 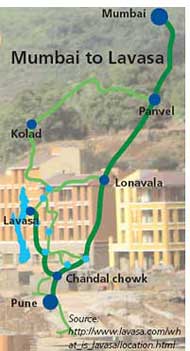 But people are dissatisfied. "Some of us have been rehabilitated on the hill top. It is highly inconvenient. There is no water here and currently the company is supplying water through tankers. For how long will it do that?" a villager questions. Maruti Sahebrao Bhapkar, an activist-cum-corporator of Pune, said "If the state and Lavasa are serious about protecting the adivasis and benefiting them, they should make the villagers shareholders in the corporation."

Activists are calling the project illegal. "The land of adivasis here is ceiling land. During the land reforms movement, excess land that was acquired by the government was given to adivasis for tilling in 1972. Land deed, locally called 7/12, was also issued in their names. Such ceiling land can neither be transferred nor sold. But the Maharashtra government has issued special resolutions to ensure that the ceiling land can be acquired for developing Lavasa," says Rifat Mumtaz of Pune-based ngo National Centre for Advocacy Studies (ncas). Mumtaz adds that Lavasa has flouted rules because the project has not taken any environmental impact assessment (eia) clearance from the Union Ministry of Environment and Forests.

Lavasa's spokerperson defends saying theirs is a tourism project situated at a height of 1,000 metres above sea level, hence they don't need an eia clearance. "Besides, Lavasa has obtained environment clearances from the Maharashtra environment department in accordance with the requirement of Hill Station Regulation, 1996," he said. Rubbishing the claim, Mumtaz asks, "How can such a huge project be exempted because it is tourism project? It will still have environmental implications."

Sampat Kale, also of ncas, told dte"The Bhil, Thakar, Dhangar and other tribal population here follow a barter system and are unlettered. Private companies and land agents have bought their land at Rs 500-1,000 per acre and sold to the company, which has also carried out land acquisitions directly. In some cases land deeds have been forged. The project should be stopped till proper investigations are done."


This is not the first time that these villages are getting displaced. In the mid-1970s, the state owned Maharashtra Krishna Valley Development Corporation (mkvdc) acquired land from these 18 villages to construct the Warasgaon irrigation-cum-drinking water dam. The dam is built on the Mose river and has its backwater spreading to 18 km. While acquiring land for the dam, some villagers were rehabilitated to nearby tehsil s and some were allotted land upstream of the dam.

"In 1974, I had about 5 ha but I did not object when my land was acquired for the dam. I was given 1.2 ha in return in another taluka. Of this, only 0.8 ha is in my name and the rest is embroiled in a legal battle. Even on the 0.8 ha, I cannot grow crops as there is no water in that area. Now, the state has given the land acquired for the dam to Lavasa Corporation on a 30-year lease. We have been protesting for the past four years but no one supports us. The project obviously has politicians' backing," says Ankush Shedge, a Mugaon resident. Activists too allege that the nexus between politicians and builders is apparent. There is proof as well, they add. According to 'Annual Return of Lavasa Corporation Ltd' acquired under rti, as on 2004, Sule Bhalchandra Sadananad and Sule Sadanand Surpiya, son-in-law and daughter of Union agriculture minister Sharad Pawar, jointly held 749,000 equity shares and 2.9 million redeemable preference shares of Lavasa Corporation. It is also alleged that other promoters of the Lavasa are close associates of Pawar.

"We unearthed a scam but no one is ready to take any action... When local media reported on this nexus, the Sule duo withdrew from the project in 2006. But the project is going on in full swing with five-star hotels springing up in Lavasa," says activist-cum-corporator Bhapkar, who filed the rti applications.

The nexus continues to run deep. To clear this massive hill station development, rules were modified to accord clearance to Lavasa project (see timeline A plan made to order). According to media reports, various departments of the Maharashtra government gave 31 no objection certificates to the Lavasa project within a year. Further, mkvdc has given clearance to Lavasa Corporation to build four private mini dams upstream of its own Warasgaon dam. These mini dams are the only source of water for entire Lavasa. Documents acquired under rti also show that Ajit Pawar, the then chairperson of mkvdc, gave clearances for these mini dams in 2002. Ajit Pawar sanctioned 141.15 ha of mkvdc's land to the company to build private dams. This land has been given on lease for 30 years at a little over Rs 82 lakh for the period. This is pittance compared to the money involved in Lavasa and the profits expected of it, claims Kale of ncas.


"The corporation has already constructed one private dam and there is no water downstream of this dam. Farmers have neither drinking water nor water for irrigation. The farmers downsteam recently attacked mkvdc and it was forced to release water. Imagine what will happen after all the four dams are constructed," says Shedge of Mugaon village. A petition in the Bombay High Court challenged allocation of mkvdc's land in 2006. The petition also said that mkvdc was not meant for commercial use and Lavasa was a purely commercial venture. The case is pending.

The company says it is building 12 mini dams in the area that will "add to the current capacity of the Warasgaon lake". "These dams will be built at higher levels increasing the existing catchment capacity. We will create an additional water catchment of 0.9 thousand million cubic metres (tmc) of which 0.4 tmc will be used by Lavasa and 0.5 tmc will be released into the lake," the spokesperson said.

But experts warn that water scarcity will not remain limited to downstream villages; it will also hit Pune city, as its water supply goes from this valley, called the Mose valley. "On the one hand, the government is destroying the present water source for Pune and on the other, it is seeking funds from the Centre for additional water supply," says Pune corporator Bhapkar. Meanwhile, protests against the project have gathered steam. Villagers are demanding a Central Bureau of Investigation enquiry.

Looks like Lavasa will remain up in the air for now.