Ganymede has a salty, underground ocean, according to observations made by the telescope 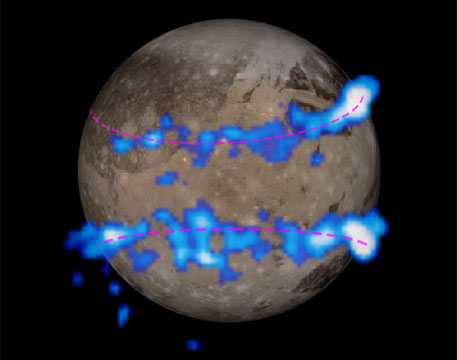 NASA has confirmed that Jupiter’s largest moon Ganymede has a subterranean ocean. The agency’s Hubble Space Telescope found the existence of the saltwater ocean, which is 10 times deeper than the Earth’s oceans, lying beneath a thick icy crust.

The finding is crucial in our search for habitable worlds other than the Earth.

“This discovery marks a significant milestone, highlighting what only Hubble can accomplish,” John Grunsfeld, the associate administrator of NASA’s science mission directorate at the headquarters, said. “A deep ocean under the icy crust of Ganymede opens up further exciting possibilities for life beyond Earth.”

Earlier, the Galileo spacecraft had hinted at the possibility of the existence of water on Ganymede. Just like the Earth, Ganymede also has its own magnetic field. This causes aurorae, ribbons of glowing, hot electrified gas, around the north and south poles of the moon.

The moon’s proximity to Jupiter causes the aurorae on Ganymede to rock back and forth along with the magnetic field changes or shifts due to the planet’s rotation.

It was by watching this rocking movement that scientists were able to determine the existence of the salty ocean beneath Ganymede’s crust. According to Joachim Saur of the University of Cologne in Germany, the presence of the ocean significantly reduces the rocking to two degrees, instead of the six degrees if water were not present.

The scientists also came up with the idea of using Hubble to learn more about the interior of the moon.

The new observation was made in ultraviolet light. It could be accomplished with a space telescope high above the Earth’s atmosphere that blocks most of the light, the NASA report says.

Earlier, scientists had reported that Saturn’s moon Enceladus has hot springs beneath its icy crust. Jupiter’s moons Europa and Callisto also have water.