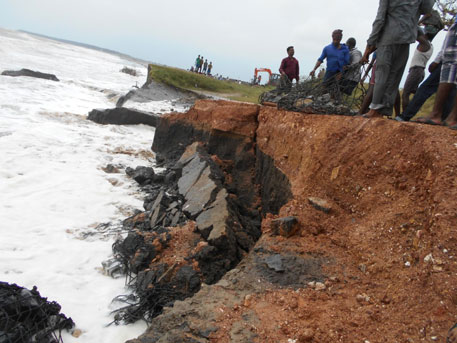 Strong winds and heavy rains brought on by cyclone Hudhud pounded the coastal districts of Odisha on Sunday as hundreds of people took refuge in cyclone shelters.

“By Saturday evening, 190,144 people had been moved to 1,059 cyclone shelters in the state. Hudhud will pass over Malkangiri, Mathili and Kharipali on Sunday night.  Hundreds of trees were uprooted in the gale in Patangi area of Koraput district. The water levels in the river Banshadhara and Rushikulya are rising.

Heavy downpour that began in early hours of Sunday left many low-lying areas in under knee-deep water and paralysed normal life.

The tidal waves breached the weak embankments, built to check saline ingress, at about 12 strategic points, inundating crops in more than 10 villages in Kendrapada district. (There were similar reports from Jagatsinghpur and Puri as well, taking the total number of reported breaches to 22.)

Over 2,000 hectares of agriculture fields were destroyed by saline ingress after tidal waves spilled over in Kansarbadadandua, Batighar and Badatubi villages in Mahakalapada block in Kendrapada district, said Rajendra Kumar Pradhan, block development officer (BDO) of Rajnagar block. Similar ingress of seawater was also reported in parts of Pentha, Bagapatia, Tantiapala and other villages.

At least eight houses were devoured by the sea in the seaside Satabhaya village in Kendrapada district on Sunday.  Some of them were new constructions. Most of the affected residents are now staying in the government panchayat office, the only pucca building in Satabhaya, said Nigamananda Rout, sarpanch of Satabhaya Gram Panchayat. “Sea water also entered the 500 year old Panchubaraha temple in the village,” Rout added. 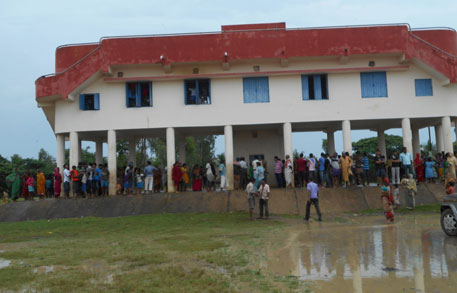 Banshidhar Rout (57) of Satabhaya had constructed his three-roomed thatched house last year after his old house was devoured by the sea. After constructing the new house half km away from the sea, he hoped to stay in the new house at least five years. But on Sunday morning tidal waves washed away his house along with those of others.

The flood waters have cut off access also; a 16 km road stretch from Suniti to Badiha in Jagatsinghpur district is now under sea water. As a result at least 25,000 people were marooned and about over 1,200 hectares land is now under knee deep sea water.

Balaram Parida, former chairperson of Mahakalapada block, said the breaches in embankment occurred because of no repair work.
Shrimps from many prawn farms were also washed away in the tidal wave in the coastal district.

Sea water ingress was also reported in many villages of Astaranga block of Puri district.

Beaches of Puri and Gopalpur were deserted as many tourists left these places before the arrival of Hudhud.