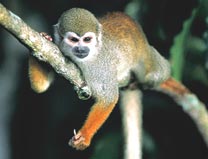 It covers 3.8 million hectares (ha) of virgin rainforest, is chock-a-block with primates, birds and reptiles, and is expected to yield hitherto unknown species. These are the vital statistics of the world's largest tropical national park, located in Brazil and beating its closest competitor -- the Salonga of Congo -- by some 270,000 ha.

"With the creation of this park, we are ensuring the protection of one of the most pristine forests remaining in the world," says Brazilian President Fernando Henrique Cardoso. Jose Pedro de Oliveira Costa, secretary for biodiversity and forests in Brazil's environment ministry, also exudes optimism.

The park -- the size of Belgium -- will only be open to scientists initially. They will study ways to combine preservation of the forest while allowing tourists to visit.