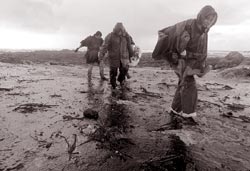 strong winds and rain hampered the cleanup of an oil spill from a tanker off the Spanish coast. The tanker, laden with more than 70,000 tonnes of fuel oil, snapped into two and sank recently. The slick has blackened the coastline of Galicia, thrown 1,000 Spanish fisherfolk out of work and coated sea birds. It will be disastrous for Europe's richest fisheries, including gourmet delicacies such as lobsters, goose barnacles, mussels, octopuses and crabs. Christopher Hails, from the World Wide Fund for Nature, Switzerland, says that toxic chemicals in the oil can cause physical damage to marine life.

The 26-year-old Prestige, sailing under a Bahamas flag, spilled fuel oil when it was hit by a storm. It took an estimated 60,000 tonnes with it to the ocean floor and left behind 280 kilometres (km) of oil slick. Ecologists fear that the tanker is now an 'environmental time bomb' as it rests 3.6 km below the surface. Experts say that the ship's tanks might crack upon hitting the sea floor or implode from pressure and even rust eventually. Some others contend that toxic oil in the tanks could harden due to frigid temperatures in the sea.

Though oil spilt in the disaster is enormous, there have been worse spills before. The Atlantic Empress sank off Tobago, West Indies in 1979 leaking 287,000 tonnes of oil. The ABT Summer went down 700 nautical miles off Angola in 1991 and spilt 260,000 tonnes of oil (see: Down To Earth, Vol 11, No 12, November 15, 2002). The latest disaster has prompted a debate on whether such old ships should be allowed to sail or not.