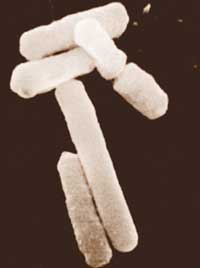 outsourcing is a gut feeling, literally. A team of biologists has found that a sizeable amount of critical functions that keep humans ticking are performed by millions of beneficial bacteria that exist in the human gut, or colon.

Scientists led by Steven Gill of the Institute of Genomic Research in Maryland, usa, who looked at microbial diversity in the gastric intestine, were baffled to see that it harbours up to 100 trillion (one trillion equals 1,000 billion) microbes, representing more than 1,000 species. This motley "microbiome" contains more than 60,000 genes -- twice as many as found in the human genome. These genes code for enzymes that humans require to digest much of what they eat -- for instance, plant sugars, such as xylan and cellobiose (similar to cellulose), which humans could not otherwise digest because they lack the necessary enzymes. Cellobiose is a key component of plant cell walls and is found in most edible plants. The bacteria also synthesise vitamins for humans.

The findings show that humans are somewhat like an amalgam, a mix of bacteria and human cells, say the scientists. According to some estimates, up to 90 per cent of the cells in a human body are actually bacteria. "We're entirely dependent on this microbial population for our well-being. A shift within this population, often leading to the absence or presence of beneficial microbes, can trigger defects in metabolism and development of diseases such as inflammatory bowel disease," says Gill.

The scientists, who analysed faecal samples of two anonymous healthy adults who had gone without antibiotics or other medications for a year prior to the study, published their findings in the June 2 issue of Science (Vol 312 No 5778). The sequencing of dna found in faeces revealed that only 1 to 5 per cent of it is not bacterial. In other words, only 1 to 5 per cent of dna is human.

They also found a large number of archaea, unicellular organisms genetically distinct from bacteria and often found in extreme environments.