Engineers are trying to develop a mechanical hand that can handle objects with human sensitivity and prove to be a boon to scientists and doctors. 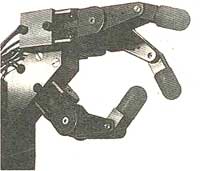 INSPIRED by the human sense of touch, robotics engineers are trying to build a mechanical hand that can feel, grab and manipulate objects just like the human hand. Ultimately, engineers trying to design sensitive robotic hands picture their research coming full circle to biology -- by restoring tactile sensibility to people who have lost it.

The mechanical hand opens up exciting possibilities for, among others, nuclear scientists who have to handle radioactive materials, space scientists who can use it to pick up rocks on other planets and surgeons who will be able to extract gallstones by remote control (Science, Vol 258, No 5087).

This project has brought together scientists and engineers from different fields such as neurophysiology and robot designing because the robotic hand has to integrate different sensors that can detect pressure, position, vibration, and strain.

Kenneth Salisbury and his colleagues at the Massachusetts Institute of Technology's artificial intelligence laboratory have already built robotic fingertips that can determine the locations of contact and the direction of forces acting on the plane it touches. This hand is sensitive enough to hold an egg without breaking it, but it is still unable to perceive shapes.

The researchers are now working on the tactile sensing problem. Several theories have emerged to explain the neural mechanism for perceiving shape and texture details. Robert Howe, a mechanical engineer at Harvard University, has successfully put together a two-fingered robotic hand that can pick up tiny rapid vibrations from an object put into its grip and inform the operator.

The mechanism by which human beings perceive and respond to an object's texture and shape is a complicated procedure. The human hand is innervated by 20 kinds of nerve fibres, most of which work simultaneously, says Kenneth Johnson, a neurophysiologist at the Johns Hopkins School of Medicine. Eight of these nerve fibres are motor fibres that control the skeletal muscles, blood vessels and sweat glands. The others are sensory fibres that convey information about pain, temperature, texture, muscle length and joint angles. Duplicating such a delicate and complicated mechanism will be difficult indeed.