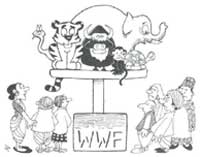 A RESTRUCTURING exercise at the World Wide Fund for Nature International (WWFI) in mid-January is neck deep in controversy. The official version: 31 staff positions have been made redundant in an attempt to cut costs and decentralise operations at the WWFI secretariat at Gland, Switzerland. Critics believe that the slashes are reflective of a deep schism within the organisation.

Observers say that there are 2 contending schools of thought wracking the world's premier conservation body: the traditionalists who believe that conservation encompasses only animals, plants and protected areas; and a group that subscribes to a more holistic people-oriented philosophy. Articulating the dilemma at the WWFI, Henner Ehringhaus, a former deputy director, told The Guardian, "The old school is...interested in people and development only as an instrument to protect the forests. They are really very anti-people. The new school is interested in sustainable development, meeting human needs, helping people improve their agriculture, and working with local communities in a more integrated approach to nature conservation. What we have seen is those of the new school fired, and those of the old school promoted."

Insiders say that funders are putting pressure on the WWFI secretariat to trim costs and run a leaner organisation that can be more active at the grassroots level. Says WWFI director general Claude Martin, "We believe the best way to achieve conservation is to empower local communities in the countries where we work. The most effective way the WWF can build this grassroots support is to strenghten its operations in the field by re-allocating resources. As part of this overall plan, we have streamlined the secretariat."

WWF-India's secretary general Samar Singh seconds this: "The WWFI has to cut its coat according to the cloth available. The structure has been identified as heavy and attempts are being made to reduce it." But there remains widespread apprehension that the trimming may herald the revival of a more straitjacketed approach to conservation -- that opposed to the empowerment of local people.

This theory has gained currency ever since Michel Pimbert, head of the WWFI's protected areas and species unit, was unceremoniously informed of the cancellation of his position a day after he received a harshly worded memo from Martin on his paper, Parks, People and Professionals: Putting 'Participation' Into Protected Area Management. The paper, jointly written with Jules Pretty of the London-based International Institute for Environment and Development, was due for publication by the United Nations Research Institute for Social Development.

Martin, asked to write a preface for the paper, launched instead into a diatribe against it. "Rather than reviewing the successes and failures of protected areas in a historical context, it attempts to mould conservation into a kind of vicious agenda," wrote Martin, and warned that the time had come to review Pimbert's work. Pimbert's ouster has generated shockwaves in conservation circles. As Darrell Posey, an anthropologist at Oxford University and a well-known proponent of indigenous rights, points out, "Pimbert's removal raises serious doubts about the direction the WWF is taking, and raises profound concerns about the institution's commitment to indigenous, traditional and local communities." But with over 10,000 projects in 130 countries, involving an investment of us $330 million, the stakes are high for the WWFI and its national organisations. Says well-known agricultural scientist, M S Swaminathan, president, WWF-India: "The WWF has addressed contemporary issues like indigenous people and intellectual property rights. It has also taken a very activist role in causes such as biodiversity and saving the Antarctic from mining."

The fear is that the current crisis could drown out the commitment built over years.