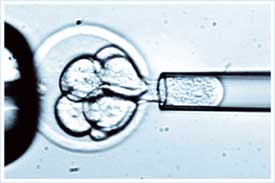 Researchers report that they have found a way to create human stem cells from a single cell, without harming embryos. Reported in the journal Nature, the alternative approach relies on a fertility clinic method of diagnosing genetic diseases in embryos. If the experiment is confirmed, it will offer an alternative to the standard technique for generating human embryonic stem cells, allowing them to be created as a side benefit of pre-implementation genetic dignosis, says the study's lead author Robert Lanza of Advanced Cell Technology of Alameda, California.

Biomedical researchers have long hoped that cells capable of turning into nearly any tissue could be grown into replacement organs for patients who have diseases such as diabetes and Parkinson's. However, the research was facing objection as it involved destruction embryos to create cell lines. Citing such concerns, the us President George W Bush, in July 2006, vetoed a Senate bill to limit federal funding of embryonic stem cell research.