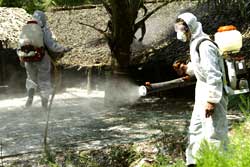 With the death of a 14-year-old boy from the h5n1 virus in the second week of June, Indonesia's death toll now stands at 39; Vietnam accounts for 43 human deaths since 2003. Earlier, six of seven family members from a remote farming village on Sumatra Island had died after testing positive for the virus. An eighth relative was buried before samples could be taken for confirmatory tests.

Soon after the incidents, in the last week of June, experts from who, the Food and Agriculture Organization, unicef and agencies including the us and European centres for disease control convened a three-day-long meeting in Jakarta. Though scientists could not link the infected relatives to contact with sick birds, they believed a limited human-to-human transmission might have occurred. In the cluster, the first case which suffered bird flu was probably infected by sick birds and then spread the disease to six family members, said a who report.