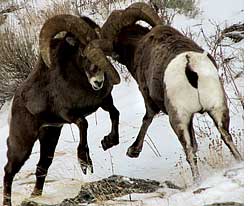 Over-harvesting is changing the very essence of prey species

THE average horn length and body mass of the bighorn sheep population in Alberta, Canada, saw almost one fourth reduction in the last 30 years. This damaged the health and viability of these animals, leaving them vulnerable to predators. A review of studies by Chris Darimont, a researcher from the University of Virginia and others from North America, shows that this is due to excessive hunting by human beings.

Using data from 29 species of 40 different animals which come under the category of exploited prey, Darimont found that the harvested prey showed a 20 percent reduction in body size than previous generations, and that they reproduced at an earlier age too.

Commercial harvesting of animals and plants is carried out on a large scale around the world. Done to the point of over-exploitation, it jeopardizes the ability of populations to recover. Many species undergo changes, genetic or otherwise, to help them escape such attacks.

In India, this has manifested itself in a reduction or complete elimination of tusks in elephants because of increased poaching for ivory. In case of fish, evolution has favoured smaller-sized ones that pass through the mesh of the fishing net, survive, reproduce and pass on the genes. However, such smaller-sized individuals are usually unable to produce large number of healthy offspring, making their population unstable.

Non-genetic changes can be seen in American codfish, where over-harvesting reduced the number of fish, in turn increasing the availability of food per fish. This led to early maturity and reproduction at the age of 5, instead of the normal 6 years. Such early maturity often leads to physiological disorders.

The solution, Darimont said, is to mimic natural predators. Natural predators take only 10 per cent of a population, while humans harvest 50 per cent. Changing tactics still might not guarantee that population dynamics will stabilize. "The pace of changes supercedes by a long shot what we've observed in natural systems. As predators, we're changing the very essence of what remains," said Darimont.