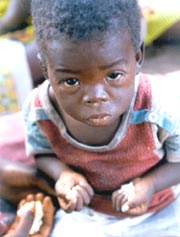 The un Food and Agriculture Organisation (fao) has just released its annual report. Hunger is on the rise again after falling steadily till the mid 1990s. The State of Food Insecurity in the World 2003 says its latest estimates "signal a setback in the war against hunger". The fao publication assesses, each year, progress being made in reducing hunger. It also highlights where countries stand in their promise to tackle hunger.

According to the report, the number of hungry people increased particularly in sub-Saharan Africa, due to war, drought, aids and trade barriers. Across the developing world, between 1995 and 2001, the number of malnourished people grew by an average of 4.5 million a year. Only 19 countries, including China, succeeded in reducing this number throughout the 1990s. "In 17 other countries, however, the trend shifted in the opposite direction and the number of undernourished people began to rise. This group includes Indonesia, Nigeria, Pakistan and Sudan." And India.

The rise in hunger came even as the world produced ample food. Says the fao report: "Bluntly stated, the problem is not so much a lack of food as a lack of political will."