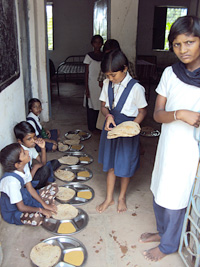 Eighty-seven per cent school children in four districts of West Bengal are undernourished right at the entry level. The shocking numbers are from the yet unpublished report of Project Dipankar, a child tracking system initiated by the department of school education in the state. The project tracks the educational performance of standard I students and their nutritional status.

The pilot run of the survey, carried out by teachers of the respective government-run primary schools, is going on in four prosperous districts of Bengal—South and North 24 Parganas, Howrah and Kolkata, the capital of the state. In 19,606 primary schools, which are participating in the pilot run, data on more than 4,70,000 students have been recorded so far.

The nutritional status is recorded through body mass index (BMI), the ratio between one’s weight to the square of his or her height. When the ratio is below 18.5, the person is taken to be underweight.

The yet unpublished figures from Project Dipankar were revealed by the Pratichi Trust, a Kolkata based non-profit set up by Nobel laureate Amartya Sen, which works in the fields of education, nutrition and healthcare. The data shows that 41 per cent of the children recorded BMI less than 15, indicating moderate malnourishment, while 24 per cent recorded BMI below 12.5, indicating severe malnourishment.

Kumar Rana, programme manager with Pratichi says he is not very surprised with the data. “Most children in these districts who avail government schooling come from disadvantaged groups; 38 per cent of these children are from below poverty line (BPL) families. Their social identity shows 43 per cent are from Muslim and 27 per cent are from scheduled caste (SC) backgrounds.”

“In West Bengal everyone looks at the problem from the class angle, without taking note of social deprivations of being a Muslim or an SC. In these districts, the upper caste or the rich mostly avail private education facilities. The data set of Project Dipankar is, therefore, skewed to begin with,” he adds.

The National Family Health Survey data (2005-06) puts the rate of undernourishment in the 0-6 age group at 38.7 per cent in West Bengal. The more exhaustive sample of Project Dipankar, on the other hand, puts the figure at 87 per cent for entry level school children.

According to a status report, ‘Food Entitlements in West Bengal’ (July 2010) by Anuradha Talwar, advisor to the commissioners of the Supreme court on right to food, 40 per cent of the children in the 0-6 age group in the state remain out of the integrated child development scheme (ICDS). The report also noted that, in December 2009, 11 per cent primary school students and 43 per cent upper primary students were not covered by the mid-day meal scheme. In the state capital Kolkata, not a single child in the upper primary school was covered under the mid-day meal scheme and only 37 per cent of the primary school children were covered.

As of March 2011, the coverage under ICDS for the 0-6 age group children stands at 68.5 lakhs in West Bengal, implying 32 per cent children remain outside the coverage of ICDS, the flagship central government scheme which aims at all round development of children and nutritional needs of pregnant and lactating mothers.

“The record keeping in ICDS is shoddy and there is a bias in under-reporting severe degrees of malnourishment (grade III and IV) among children. With better record keeping, the ICDS figures will mirror the data from project Dipankar’, says Talwar. “There is an urgent need to plug the leakages in the public distribution system (PDS). Most ration shops have 500-800 bogus cards, while the actual poor continue to be excluded,” she adds.

Notably, according to the recently released Global Hunger Index 2010 by the International Food Policy Research Institute (IFPRI), India is home to 42 per cent of the world’s underweight children and ranks 67 among 84 countries, faring worse than countries like Pakistan and Sudan.