Hunt on for toxins in toys

Committee set to test toxicity in toys in India 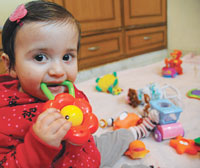 AN 11-MEMBER committee, formed by the Indian Council for Medical Research (ICMR), is set to begin screening of toys made in India and abroad for toxicity.

The tests will be conducted on 2,800 samples of toys collected from across India. Samples of branded and unbranded toys will be picked from fairs, stores and supermarkets, said B Dinesh Kumar, assistant director of the National Institute of Nutrition. "The sample collection will begin around October," Kumar added.

The committee includes experts from the National Institute of Occupational Health, Ahmedabad, National Institute of Nutrition, Hyderabad, and the All India Institute of Medical Sciences, New Delhi. The committee was formed in November, 2009, by ICMR after the Supreme Court ordered testing of heavy metals in toys. The Court's decision followed a petition filed by some NGOs which argued that Chinese toys were coated with material containing heavy metals like lead and cadmium. Heavy metal poisoning leads to complications, especially among malnourished children.

It inhibits the enzyme system, causes anaemia, retards growth and irreparably damages the organs, especially the nervous system. About 70 per cent of toys sold in India come from China (See 'Lethal Games', Down To Earth, 16-31 January 2010).

"Equipment for testing have been bought from Germany," Kumar said. The project's budget is