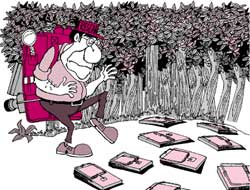 Even as the brouhaha over the tiger continues, the Union ministry of environment and forests (moef) has turned regressive. Aministry circular has asked all state forest departments to stop giving permission for any kind of research that entails 'handling' of animals (touching, holding or even wire-tripping them for a camera shot). The ban is a blanket one: across forests, protected and otherwise, and across species.

The wildlife research community is jolted. Madhav Gadgil, member of the National Wildlife Board -- nwb, the country's apex body on wildlife management, headed by the Prime Minister (pm) -- sent a letter asking the issue be discussed at the nwb meeting convened in Delhi. Gadgil wanted the pm to intervene. The latter merely promised to encourage wildlife research, setting the Central Bureau of Investigation off after Sariska's missing tigers.

Broaching the issue with the pm had just one effect. Forest departments across the country tried to hush up the circular's existence; even researchers who now found their work blocked weren't able to get their hands on it. moef officials neither confirm nor deny its existence. But there is no denying this coincidence: the circular was sent just when researchers across the country reported missing tigers in more than four tiger reserves of India, raising serious doubts about moef's intentions.

moef holds absolute fiat over who carries out research on forest lands and who doesn't (see box: And the act says...). "In the absence of any guidelines the draconian provisions are used with such capricious intent that researchers are completely at their mercy," says Ulhas Karanth, senior wildlife biologist and director of the Wildlife Conservation Society, Bangalore, one of the premier wildlife research groups in India. He should know: in one of the longest lasting field studies on tigers in Nagarhole national park, Karnataka, Karanth suffered the brunt of the department's ire when permits for camera traps of tigers became hard to come by for nearly three years. The reason: "The new state forest minister wanted to reopen logging and we went public against it," says Karanth.

In April 2004, 18 researchers and field workers including Karanth were hauled to court over nine different cases by the state forest department for 'trespassing without permission'. To do what? To conduct research, which included hydrological studies in the Kudremukh National Park, Karnataka. The studies were done two-three years before the case was filed. More importantly, the same researchers used some of the studies in the courts to successfully prevent the government from opening up Kudremukh to mining.

"We can still get away, for we are now senior researchers. But what of the young biologists or m s c students who have to deal with this constantly and have no avenues or recourse?" asks Karanth. Take Abi Tanim, a wildlife researcher from US-based University of Missouri, who had to wait for more than six months to get a permit and carry out research on Indian wolfs in Andhra Pradesh. He got the permit, but then arrived the circular, and now he's waiting again.


Tanim's isn't a one-off case: recounts a young researcher working for a senior biologist on tigers, "The park director once came up and asked us not to paint our transects (lines drawn on the forest floor to do sample studies) in red colour because the tourists would not like to see bright-coloured marks in the forest. He wanted them painted brown -- who would find the transects in the dense forest then? The entire purpose was to have a clearly visible path!" Such hilarious details trickle in from nearly all researchers who have worked in the field.

While for some sciences the laboratory is the house of all ideas, for a wildlife biologist the forest or free ranging animals n the wild becomes the laboratory. Outside the glamour of a few camera-touting, National Geographic acclaimed, high-profile so-called conservationists are actually hundreds of field workers, assistants, researchers, biologists and ecologists who spend years together in the field collecting data that then is analysed back at the office. The data, more often than we are made to believe, comes not from watching tigers or lions but from meticulous work, which can range from collecting faecal material of deers to looking for sub-surface amphibians in the middle of night in thick monsoon. The end result of living several years, flitting between an office and a dense forest, is, at the end of the day, a few academic papers, sometimes a thesis and occasionally a bright career. But all this gets nixed when the forest department turns research into a turf battle.

The problem, many point out, is that the forest department traditionally has never been trained to carry out research or appreciate it. "It's quite like asking the guard at the gate of the Indian Institute of Technology to stand at the gate and tell what kind of research should be carried out inside," says one biologist quite succinctly.

Kartik Shankar, fellow at the Ashoka Trust of Research and Education in Environment, Bangalore, says, "One big hurdle is the entire animal rights' lobby groups, which still hold strong sway over the ministry and constantly pushes it not to give permits for work with animals." He also counters a staple forest department grouse that research doesn't ever help the parks with their conservation goals. "I think the right to research is an equivalent of intellectual property rights. Even if we agree that the research has been rather unhelpful for conservation, I think it's our right to intellectual property that gets denied when we aren't allowed permits on flimsy grounds."


The permits controversy isn't a new one. In the mid-1990s, a standing committee of the erstwhile Indian Wildlife Board had ratified a set of guidelines for issuance of permits by the state forest departments. The guidelines somehow got buried in the labyrinth of the Wildlife Institute of India (another government arm) and never saw the light of the day. Rauf Ali, a senior ecologist and director of Feral, an environmental ngo based in Pondicherry, points out, "Look at the Wildlife (Protection) Act. It has several chapters on every aspect of wildlife regulation and ecology but none on research. Does it not show where the ministry's priorities lie? Why can't we have specific laid-down guidelines for who can do research, how it ought to be sanctioned? Make the process clear and open to public scrutiny."

But the real hurdle is the ministry itself. Will it really want to let go of the only hold it has over researchers that roam India's protected forests, and report exactly what they have found? As the tiger episode has shown, these researchers can act as whistleblowers against corrupt practices and officials, and the ministry has learned to use the research permit as a solid stick to beat the 'errant' researcher by. If the Prime Minister really wishes to promote research, as he promised at the nwb meeting, could he enable a scientific temperament in the ministry?