By identifying the proteins with which the gene responsible for Huntington's disease reacts, researchers are optimistic of finding an antidote for this ailment 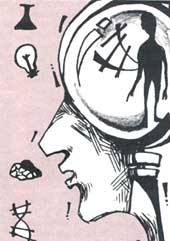 A NEW find by a team of researchers from the Duke University Medical Center, us, may hold a lot of promise in finding a suitable antidote to Huntington's disease. This genetic neurodegenerative condition that strikes in the middle age causes involuntary muscular movements and, at an advanced stage, dementia.

Three years ago, medical researchers identified the gene responsible for Huntington's and the disease-causing mutation. The mutation expands the length of a repeated stretch of the amino acid, glutamine, in the gene. This, however, did not explain how the expanded region causes the neurons to wither away. The next target of the researchers was to find the proteins that interact with hungtingtin, an essential product of the diseased gene.

The Duke team of James Burke, Jeffrey Vance, Warren Strittmatter, Allen Roses and others reported (Nature Medicine, March 1996) that both huntingtin and another protein responsible for a rarer neurode-generation, interact with the protein glyceraldehyde 3-phosphate dehydrogenase (GAPDH). An essential enzyme in glycolysis, the metabolic processing of sugar - GAPDH was the only protein identified with a known function.

Burke pointed out that the mutant proteins in Huntington's disease and four other less common neurodegenerative diseases curb energy production by interfering with GAPDH. This finding might go a long way to finally prove the hypothesis that metabolic stress is a common pathogenic mechanism in the diseases caused by glutamine repeats.

Burke and his colleagues were spurred by the fact that diseases caused by the expansion of glutamine sequences were a class of diseases under the generic name triplet repeat disorders. The DNA has a triplet of nucleotide bases (bases are formed by any three of the following proteins - adenine, guanine, cytosine and thiamine) and a mutation causing the expansion of a triplet is almost always to blame for typical neurodegenerative disorders. Sometimes, the expansions occur outside the protein coding regions of the genes but in Huntington's and the other diseases studied by the team, the effect of the mutation is to lengthen stretches of glutamine within the proteins themselves. The researchers then tried to understand how eXactly the mutations cause the disease. They tried to isolate the proteins in the human brain that bind to glutamine and pull Out GAPDH. Amazingly, huntingtin along with another protein that causes dentatorubral pallidoluysian atrophy (DRPLA, a kind of muscular atrophy) bind to GAPDH in the tests. The speculation that an@', enzyme related to sugar metabolism played an active part was further strengthened by the results of an experiment carried out at the Harvard Medical School, us. Monkeys injected with drugs inhibiting sugar metabolism showed sign is of advanced Huntington's. Unlike the body tissues, which can get energy from stored fat, the brain cells almost entirely depend on glucose for energy. The story was quite clear to the researchers now: glucose must be processed by proper enzymes to yield energy, hence interference with a key enzyme like GAPDH essentially harms the nerve cells by suppressing energy production. Moreover, normal forms of protein bind to GAPDH with little effect, but mutant forms bind in such a way that they inhibit the enzyme. Test tube results clearly point out that the team is on the right track.

The next all important question that the researchers will face is: how each disease targets a different set of neurons even though each mutant protein is present quite widely in the brain, and GAPDH is in every cell. They feel that there may be still more cell-specific proteins that may eventually provide an answer. They are, however, confident that their finding may be one of the better leads on potential treatment of Huntington's disease. (Science, Vol 271, No 5253).