Changing a severe hurricane’s name from “Charley” to “Eloise” could triple its death rate, suggest researchers 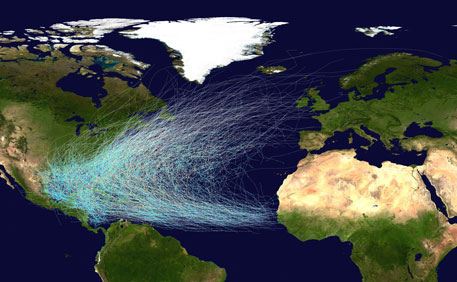 Victor will be scarier than Victoria and Alexandera will not be able to force as many people to take precautions as Alexander. This is what a study of six decades of US hurricane fatality data, put together by the National Oceanic and Atmospheric Administration (NOAA), has revealed.

According to Researchers at the University of Illinois Urbana-Champaign, the hurricanes with female names were more deadly than those with male names because people think they sound less threatening and, therefore, take fewer precautions to protect themselves. The report that was published after studying death tolls from the 94 hurricanes that hit the US from 1950 to 2012 even suggested that changing a severe hurricane’s name from “Charley” to “Eloise” could triple its death rate.

Interestingly, in a second part of their study, which is published in the journal Proceedings of the National Academy of Sciences, the researchers gave participants a few hurricane names and asked them to predict the intensity. In one experiment, volunteers were given the names of 10 hurricanes and asked to predict their intensity based on nothing but the name. "Omar" was predicted to be the most intense. "Dolly" was expected to be the least intense.

The researchers also found that women were just as likely as men to think hurricanes with male names were more daunting than those with female names.
Hurricane Rita, Katrina, that hit the US in 2005 are a few examples of the deadliest hurricanes.

“It now appears that gender biases apply not only to people, but also to things,” said Sharon Shavitt, behavioural scientist at the University of Illinois Urbana-Champaign. "This is just some more data for them to consider," Shavitt said. "We want to make them aware that in addition to all the good relevant information they provide, people are also drawing information from something totally irrelevant—the gender of the name," added the researcher.

The research results have drawn huge debate over the Internet. While one expert says social science and interdisciplinary research is critical to better understand how people respond to different types of hurricane, the other says it has methodological flaws.

Hurricanes are a type of tropical storm that is formed in the southern Atlantic Ocean, Caribbean Sea, Gulf of Mexico, and in the eastern Pacific Ocean. They can cause catastrophic damage to coastlines and several hundred miles inland. June 1 officially marks the beginning of the 2014 hurricane season in the country. Sandy, Katrina, Rita are a few which have caused unprecedented damage to the country.