A rice hybrid developed in India can help reap an extra Rs 2,500 per ha 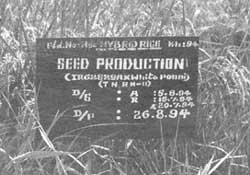 THE scientists at the School of Genetics, Tamil Nadu Agricultural University (TNAU), Coimbatore, are a happy lot these days. And with good reason: India's first rice hybrid, MGR1, released by them after 15 years of research, has met with an enthusiastic response from farmers.

The hybrid, named after former Tamil Nadu chief minister M G Ramachandran, has a yield of 6,000kg/ha, as against an average of 5,000kg/ha for other varieties. It is moderately resistant to the sheath rot and brown spot diseases that afflict paddy. The seed requirement is also lower: MGR1 requires 20kg of seed per ha while others require at least 50kg, all of which translates into more money. "Farmers can make an extra profit of about Rs 2,500 for every hectare of MGR1," says M Rangaswamy, director, School of Genetics, TNAU, and the brain behind the hybrid.

"A 3-line breeding system, with A, B and R lines, has been used to develop the hybrid," says Rangaswamy. The A line is a cytoplasmic male sterile (CMS) line, so called because it produces only shrivelled anthers with pollen grains that are sterile. This line has a recessive fertility restoring gene, designated rf rf, and a sterile cytoplasm, which together account for the male sterility.

The R line, or the restorer line, on the other hand, has a dominant fertility restoring gene, Rf Rf. On crossing a male of the R line with a female of the A line, the dominant Rf Rf gene of the restorer subdues the recessive rf rf of the CMS. The seeds produced by the crossing give a hybrid variety with high vigour or yield.

Rangaswamy cautions that farmers cannot follow the normal practice of saving some of the seed for the next crop because this will cause the hybrid vigour to be lost.

As long as one has seeds of the A and R lines, one can go on producing hybrid seeds. But how does one get seeds of the male sterile A line? This is where the B line, the maintainer line, comes in. The B line is chosen such that it has characteristics similar to A, but without a sterile cytoplasm. Like the male sterile A line, it has the recessive rf rf gene, but since its cytoplasm is not sterile, B can produce fertile pollen. A cross between the A and B lines, therefore, gives rise to more of A, the CMS line.

The hybrid seeds can also be produced by farmers themselves in their fields. "This can be easily done by alternating 8 rows of the CMS with 2 rows of the R line," says Rangaswamy. "Natural cross pollination between the 2 gives rise to MGR1 seeds from the A line females."

MGR1, released during the kharif season last year, is one of the more successful rice hybrids developed under the Hyderabad-based Directorate of Rice Research's project for Development and Use of Hybrid Rice sponsored by the United Nations Development Programme and the Indian Council for Agricultural Research.

Experts say the Indian rice hybrids are more impressive than that of China, a major rice producer, which has only one male sterile line for its entire hybrid rice programme whereas we have 5. This, they say, would give much greater safeguard against pests and diseases. A male sterile plant is a self-pollinating plant (in which both the male and female organs rest in the same flower) whose pollens, the male part, have been removed. This turns the plant into a female which can then be fertilised with the pollens of another strain whose traits are desired in the hybrid.