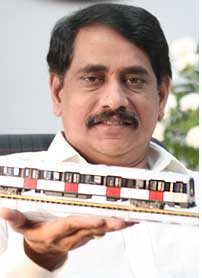 the stage is set for the metro project in Hyderabad. The first phase of the Rs 9,696 crore project will begin next year and the city's metro corporation is in the process of shortlisting bids. Also, there have been widespread protests by environmentalists who say that the city doesn't need a project of this scale and that the existing public transport system should be improved.

It is feared that around 5,000 structures and 4,000 houses will be demolished for widening roads for the over-ground metro. Some of the structures are of historical importance, for example the Salar Jung Museum, the Charminar and the legislative assembly building, say local architects.

A study by public transport experts of the Regional Engineering College, Warangal, in 1999 recommended several measures including improving the public transport system, widening roads, linking suburban train and introducing efficient bus services to ease the city's traffic. Environmentalists say the project will take more than eight years and will cause a lot of pollution.

"But the authorities haven't implemented any of the report's recommendations. Besides, we have several cheap and effective alternatives to the metro," M Ved Kumar, president of the Forum for Better Hyderabad, told Down To Earth.

But according to N V S Reddy, managing director, Hyderabad Metro Rail Corporation: "Metro is a comprehensive solution for traffic needs of a city like Hyderabad with over eight million population. We are aware of various concerns and will take care of them."