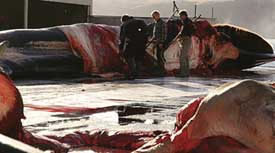 THE government of Iceland recently resumed commercial whaling, contravening a 20-year international moratorium instigated by the International Whaling Commission (IWC). Iceland's ministry of fisheries announced permission for the commercial hunting of 30 mink and nine-fin whales. Fin whales fall under the Red list of endangered species. IWC issued special permits to Iceland, Norway and Japan to whale for scientific purposes. But Iceland had always maintained a whimsical relationship with IWC. Between 1986 and 1989, it took a permit to hunt about 60 whales per year under a scientific permit and then left IWC in 1992 after failing to get permission for commercial hunting. In 2002, it joined IWC again and acquired permission for scientific catch. A month back, it started commercially supplying whale meat produced from its scientific research. The announcement has drawn sharp criticism from the global community, which called on the Iceland government to reconsider its decision.