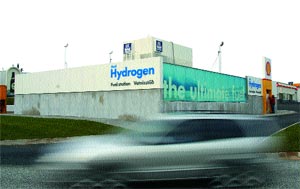 Iceland has moved one step closer to its goal of using only renewable sources of energy by the year 2030. It recently inaugurated the world's first hydrogen fuel station in the capital city of Reykjavik. "This is a major step toward a hydrogen society," said Iceland's commerce and industry minister, Valgerdur Sverrisdottir.

The station is operated by the Royal Dutch/Shell oil company. It will be initially used to provide fuel for three DaimlerChrysler buses under an eu-aided scheme that is estimated to cost around us $7.7 million. Iceland also seeks to operate other vehicles such as cars and boats on hydrogen. The gas is considered pollution-free, as it releases only water in contrast to fossil fuels that are responsible for huge quantities of toxic emissions.

The us and eu are among those researching the use of hydrogen in fuel cells to produce electricity that can run vehicles. But teething troubles, including high costs and storage and distribution problems, continue to plague hydrogen technology.