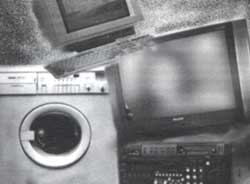 IDLENESS has a hefty price tag, inform old proverbs. And in this age of electronic gadgetry, that price tag has become even heftier, inform US-based scientists and researchers. Electrical and electronic gadgets such as televisions, compact disc (CD) players, videos and burglar alarms are consuming more energy in stand-by mode than when they are being used.

Maria Sanchez and her colleagues from the Lawrence Livermore National Laboratory in Berkeley, California, tested more than 50 small electrical appliances - from electric blankets, televisions and computers to coffee machines, irons, doorbells, electric mowers, VCRS, aquarium heaters and pool pumps - and concluded that half of all consumer electronic energy is used up in the stand-by mode. And this, Sanchez says, costs American consumers an astounding US $1 billion in wasted energy every year.

The researchers say while electronic devices are lying dormant, running their clocks, maintaining internal memories or simply displaying their settings, they consume around 40 terawatt hours of electricity in the US annually - enough to power a city the size of Chicago or London. Many machines use almost as much power on stand-by as when working. For instance, it takes 15 watts to run a typical CD player, but an average of 11 watts to keep it on stand-by. Satellite television systems (televisions fitted with receivers for satellite broadcast) use 15 watts when active and 14 watts on stand-by, while security systems gobble up 22 watts when active and 18 watts on stand-by mode.

Given the long hours these systems spend idling, each uses far more power in stand-by mode than when actually working. Bad design is largely responsible for this massive power drain, says Sanchez. In a separate survey of CD players last year, her colleague Wolfgang Htiber found that for most products, the standby power intake can be reduced to as little as one watt or even less.

She supports proposals to establish a national labelling system to promote machines and appliances that meet this standard. Such a system could reduce stand-by power consumption in the US by as much as 50 per cent - more than 20 terawatts per year. Recently, the Dutch electronics giant Philips announced the launch of a device that can dramatically reduce the power used in stand-by mode.

The study also found that small electrical appliances consume a fifth of the electricity used in a typical American home and will account for almost all of the expected increase in the coming decade. Again, bad design is a major factor - manufacturers have not kept up with the energy efficiency improvements made in the many larger pieces of domestic equipment.

A water-bed heater can use more power than a modern fridge, and a large aquarium more than an entire central heating system. Halogen spot lamps consume 300 watts on average compared with 75 watts for conventional lamps.