National Optic Fibre Network will connect all 250,000 gram panchayats of India by 2016 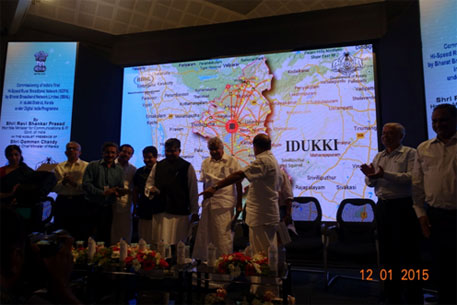 India's first high-speed rural broadband network, the National Optic Fibre Network (NOFN), was commissioned in Kerala's Idukki district on Monday. With this, the district, which has a large tribal and rural population, has become the country's first district to have all its village panchayats connected to NOFN, the world's largest rural broadband connectivity project through optical fibre cable.

NOFN is the only telecom project of its kind in the country in terms of volume of work, geographical spread of work, reach, quantity of optical fibre cable laying involved and costs. The Rs 30,000 crore NOFN project, which involves laying of about 600,000 km of optical fiber cable, is a part of Central government's Digital India initiative. The project seeks to link all the 250,000 gram panchayats in the country, located in 6,600 blocks in 631 districts through optical fibre network, providing high-speed Internet connectivity with a minimum bandwidth of 100 megabits per second (Mbps).

"Our country is entering into a new era of digital empowerment. The NOFN project is a giant leap to bridge the digital divide between urban and the rural India by linking all the gram panchayats in the country through the common platform of optical fibre cable. Our vision is to transform our country into a knowledge economy," said Ravi Shankar Prasad, Union Minister of Communication and Information & Technology, who launched the programme in Thiruvananthapuram by receiving the first-ever mobile call from Edamalakkudy, a remote tribal gram panchayat in Idukki. This tribal gram panchayat is 34 km away from the nearest town and has no road connectivity, electricity or piped water.  This settlement was connected to NOFN through VSAT media which has also provided them with voice connectivity. All the 52 other gram panchayats in the district have been comnnected by optical fibre cables.

NOFN, implemented by Bharat Broad Band Nigam Limited (BBNL), a Special Purpose Vehicle set up by the Central government, will be completed in a phased manner by 2016. The project will cover 50,000 gram panchayats in the first phase and will be implemented by three Central public sector units—BSNL, Railtel and PGCIL. The project will be funded by the Universal Service Obligation Fund (USOF) of the Telecom Department.

According to Aruna Sundararajan, chief managing director of BBNL and administrator of USOF, optical fibre is the most economical means of communication as it can carry higher bandwidth applications. NOFN will ensure high-speed broadband connectivity to all the gram panchayats. This is to be achieved by utilising the existing optical fibre network of public sector companies and extending it to village panchayats.

"GPON technology will carry information in the form of packets which is the technology of the day," says Sundararajan. She also points out that this technology has low power consumption equipment which is designed and manufactured in the country and hence suitable for rural India.

To ensure connectivity throughout the day, solar power back up is also provided, she adds.

The project boasts high-capacity network management system and network operation centre. Plans for about 4,500 Blocks have been put on BBNL website  under "Know your Fibre".