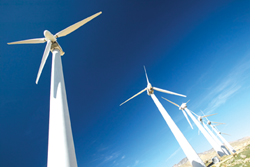 a report of the International Energy Association (iea) has labelled the German Energy Policy as 'good', but at the same time has raised doubts about the country's future energy security.

In its report Germany 2007 Review, the Paris-based energy institute lauds the country's success in tapping renewable energy sources such as wind power; a fourth of Germany's power comes from wind energy.

However, it raises questions about the country's policy to phase-out nuclear power and says the move will have serious impact on the country's energy security, economic efficiency and environmental sustainability. "Eliminating nuclear from the supply portfolio will reduce supply diversity, increasing reliance on energy imports, particularly natural gas, which is not diversified enough," notes the report. "Without a doubt, a (nuclear) phase-out will limit Germany's full potential to reduce its emissions.

The report acknowledges that significant reforms have been made in "pivotal electricity and natural gas markets", but goes on to say that dominance of large incumbent companies at all levels of the electricity and natural gas market is a serious impediment to the reforms. The report, therefore, urges Germany "to introduce separate independent system operators to manage transportation assets so that all market participants play on an equal footing and help drive competition".

The report also calls for a change in the distribution system of wind power, and recommends the country shift from its renewable energy law and the current feed-in tariff, to a quota-based certificate scheme.

Meanwhile, the German Wind Association and the World Wind Energy Association (wwea) have criticised the iea report saying it lacks comprehensiveness. In a joint press statement, the associations said "iea unfortunately ignores the basic economic and political preconditions of a successful implementation of wind technology on a large scale. iea also ignores the failure of quota systems in countries like Sweden or the uk, which have led to much higher remuneration prices...but at the same time have led to only small numbers of new installations."

According to wwea secretary general Stefan Gsnger, the new report is an impediment to the progress of renewable power in Germany.

"Germany still is a locomotive, accelerating the wind energy utilisation across the world and a change of legislation as suggested by iea will retard that function, thus creating major problems for wind energy on a global scale," Gsnger says.