The World Bank’s investing arm, International Finance Corporation (IFC), is the largest multilateral source of loan and equity financing for private sector projects in the developing world. With a portfolio of US $3.6 billion, IFC states India now forms its largest country of operation with a total of 248 projects.

But are all these projects socially and environmentally sustainable? Not really. Centre for Science and Environment (CSE), a Delhi-based non-profit, found serious lapses in the environmental review process of IFC’s projects, contrary to the claims made during investment.

IFC claims that its policy check for environmental worthiness of the recipient units ensures meeting its eight social and environmental performance standards (PS), including PS # 3: pollution, prevention and abatement.

It adds: “Central to IFC’s development mission is its effort to carry out its investment operations and advisory services in a manner that ‘do no harm’ to people or the environment. Negative impacts should be avoided where possible, and if these impacts are unavoidable, they should be reduced, mitigated or compensated for appropriately.” 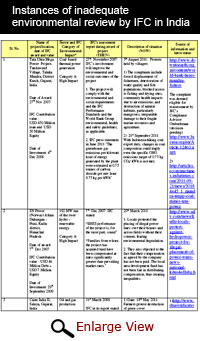 Further, IFC claims that during running of the project it evaluates the project’s compliance with the applicable environmental and social requirements during the lifetime of the project by reviewing the annual monitoring reports (AMRs). These are prepared for the ongoing performance of a project.

But IFC’s claim that it follows sound environmental practices is not entirely true. A case that stands out is that of Usha Martin in Jamshedpur (see 'Pollution glorified' in current issue of Down To Earth). The table above lists a few other projects that demonstrate lapses in IFC’s environmental review process. In one case, that of Granules India Limited, a pharmaceutical manufacturing unit in Andhra Pradesh, IFC made the investment in June 2007 even though the state’s pollution control board issued a closure notice in October 2006.

IFC’s classification of its industrial projects is also a matter of equal concern. The agency puts its projects in two broad classes based on their potential environmental impacts:

1) Category A: projects with potential significant adverse social or environmental impacts that is diverse, irreversible or unprecedented;

2) Category B: projects with potential limited adverse social or environmental impacts that is few in number, generally site-specific, largely reversible and readily addressed through mitigation measures

What is surprising is that most of the industrial projects financed including those of phosphate industries have been classified as Category B, whereas the likely situation on the ground now may indicate much higher adverse impacts.