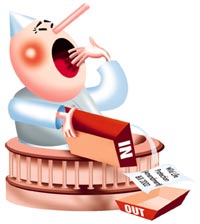 "Informed debate" is an oxymoron in the Indian parliamentarian's dictionary. The passing of the Wild Life (Protection) Amendment Bill, 2002, in parliament on December 19 seems to have reconfirmed this.

After more than half a decade of rumination by the Union ministry of environment and forests (mef), the bill was finally tabled in the current session. It sailed through the two houses with the most listless of debates. This, on an issue bound to affect the future of millions on the margin of subsistence.

The mef tabled the bill with utmost secrecy (see: Down To Earth, Vol 11, No 14, December 15, 2002). The members of parliament (mps), however, found the bill to be of -- as one of them mentioned -- "little political significance for their respective constituencies". None rose to challenge either the intent or the spirit of the bill, despite the raging controversy on forest encroachments both within and outside parliament. Besides a few remarks on the most peripheral of issues, the bill was passed.

"Do not expect mps to know the details of the bill. They are not very informed," said C Ramachandriah, chairperson of the Parliamentary Standing Committee on Science and Technology, Environment and Forests. "Saving wildlife is fine, but why should the poorest pay again and again for doing so?" he added.

K Rama Rao, mp, Andhra Pradesh, said: "If mps don't read the text and the fine print, they are bound to be led by the nose by the bureaucrats."

Some rib-ticklers from the debate

abrar ahmed, indian national congress, rajasthan: (In) Ranthambore...a tiger called Bhambo Ram has not been seen for the past one year. Get an enquiry conducted by the Central Bureau of Investigation.

manoj bhattacharya, rashtriya samajwadi party, west bengal: Some areas are being notified as forests...tribal life is being disturbed...I welcome the bill.

t r baalu, union minister for environment and forests: Two hundred monkeys have been captured in and around Delhi and they will be sent to the jungle.

maneka gandhi, independent: The government has made a special act to acquire lands for making a highway. Could we not apply this also to the making of an elephant corridor that stretches from Bhutan to Karnataka?