PCBs, dioxins write the fate of people living near a dumpsite 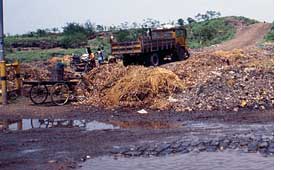 generations of people who live near the Dhapa dumpsite in East Kolkata might have underdeveloped brains and weak immunity. Courtesy: heavy exposure to persistent organic pollutants. This is the claim of a team comprising researchers from India, Japan and the US.

Polychlorinated benzo dioxins, polychlorinated biphenyls (pcbs) and organochlorine pesticides are persistent organic pollutants (pops) that resist environmental degradation. The pollutants lead to adverse health effects like liver damage, irregular menstrual cycles and lowered immunity. They bioaccumulate in breast milk and are passed on to the progeny. Dioxins and pcbs are also linked to low intelligence quotient (IQ) in children.

In a previous study the researchers found high dioxin levels in breast milk samples of mothers residing near a dumpsite in Chennai.For the Kolkata study, breast milk samples were collected from mothers living near the open dumpsite and from a reference area 30 km away. Dioxins were detected in all the samples. But concentrations of pcbs in samples from the Dhapa colonies were significantly higher than the levels for the reference site. Concentrations of dioxins and pcbs were one or two rders higher in villages right next to the dumpsite than 2-3 kms away, said lead researcher Mayasuki Someya from the Centre for Marine Environmental Studies at Ehime University in Japan. The January 2010 issue of Environment International will publish the study.

The study shows the ignorance of common people and indifference of civic bodies like Kolkata Municipal Corporation, said Raja Lahiry of K P C Medical Hospital in Kolkata. pcbs were used as coolants for transformers and plasticizers until their production and use was banned in the 1970s. The US Environmental Protection Agency has classified dioxinsa byproduct of polyvinyl chloride productionas likely human carcinogens.