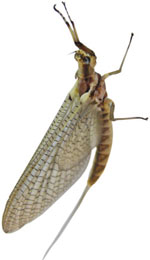 MUCH has been talked about how climate change poses risk to ecosystems and individual species. But no one has analysed how global warming will affect the genetic diversity hidden within the species.

DNA studies have revealed that traditional species contain a vast amount of “cryptic” diversity—such as different lineages or even species within species. “The loss of biodiversity expected in the course of global warming has been greatly underestimated in previous studies, which have only referred to species numbers,” says Steffen Pauls of Biodiversity and Climate Research Centre in Germany.

Researchers from Senckenberg Research Institutes and Natural History Museum in Gelnhausen, Germany, have made the first attempt to understand the link.

The team looked at aquatic insects living in the mountain streams of central Europe—seven species of caddisfly, and one each of mayfly and stonefly. The insects were chosen because they are likely to be vulnerable to rising temperatures—they need cold water, and have limited ability to travel large distances. To measure genetic diversity, the team sequenced genes in the insects’ mitochondria, energy-generating cellular organelles that have a small genome.

This allowed the authors to divide each species into a number of evolutionary significant units (ESUs)—the technical term for a population within a species that is genetically distinct from the rest of its kind.

On the basis of where in Europe each ESU is found, the researchers then analysed whether other insects in the same group would be able to tolerate higher temperatures or move to somewhere cooler, using two models developed by the Intergovernmental Panel on Climate Change (IPCC). The study was published online on August 21 in the journal Nature Climate Change.

They found that around 79 per cent of ESUs can become extinct by 2080 if the greenhouse gases emissions continue unabated. In case of reduced emissions 59 per cent of the ESUs were under risk of extinction.

“Our study also shows that species will survive but the majority of the genetic variations, which in each case exist only in certain places, will not,” says Carsten Nowak, lead researcher.

This means that self contained evolutionary lineages in other regions will become extinct, he adds. The authors note that knowledge about effect of climate change on genetic diversity is crucial to implement well-directed conservation strategies.

Commenting on the findings, Raghavendra Gadagkar professor at Centre for Ecological Sciences, Bengaluru says, “The techniques used by the researchers can now be readily applied to species of great economic importance such as agricultural pests or those of medical importance such as vectors of diseases.”